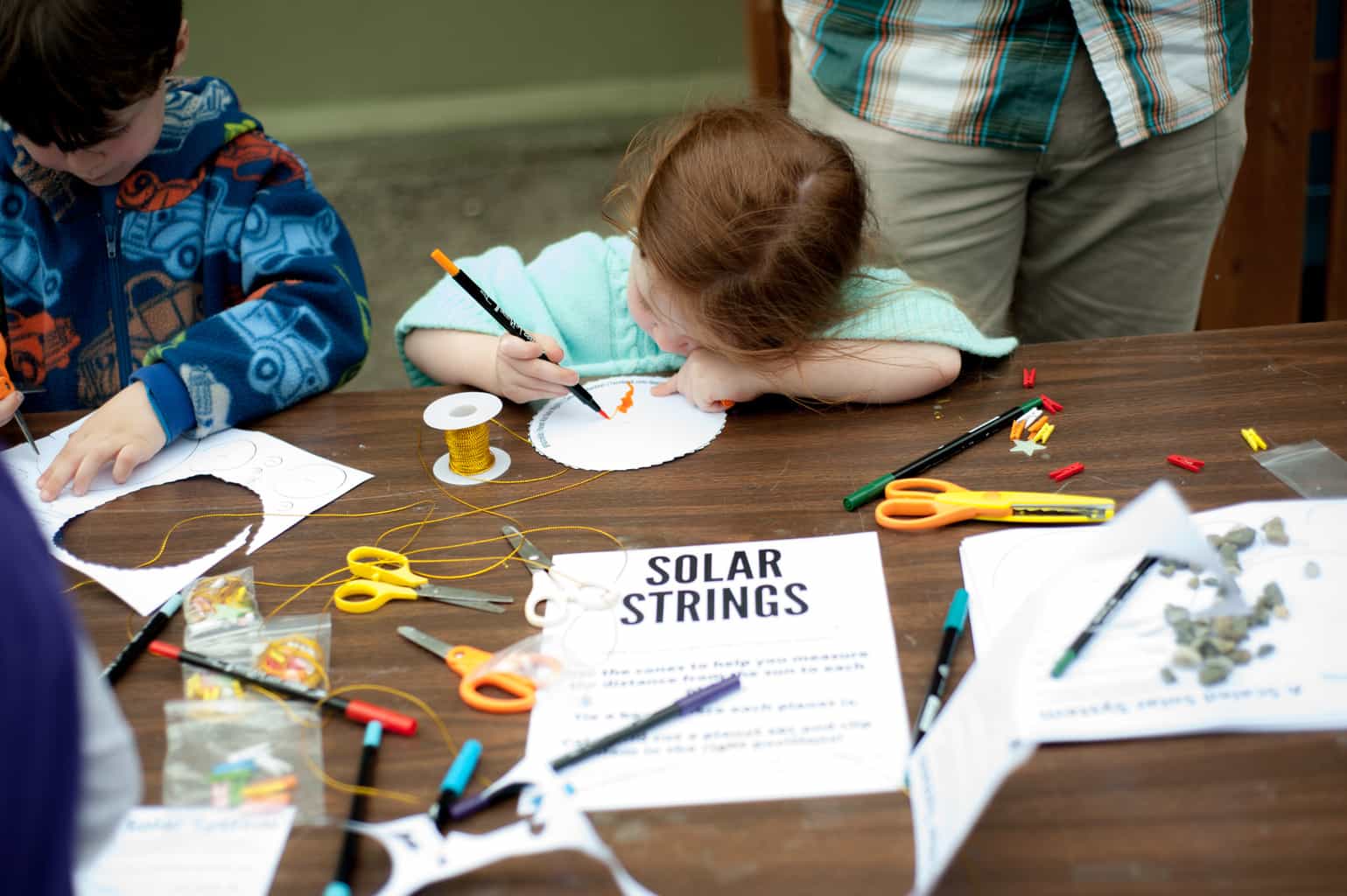 There is a lot going on in our solar system, and compared to the vastness of the universe our solar system is minuscule, but to us, it is enormous. Our solar system is home to 8 planets, more than 60 moons, and multiple belts of asteroids. When some planets are billions of miles away, it is hard to imagine the real sizes and distances in our neighborhood. That’s why I love this solar system model for kids.

We created a solar system model to scale of the planets, based on Earth shrinking down to the size of a marble. In this model, the Sun would be 5 feet in diameter. Of course, if we can see Earth, we can’t really feel the distances. Uranus and Neptune would be miles away in this model! This would make a great solar system model for school project if you happen to have some butcher paper on hand to make a 5 foot Sun, and then crowd the other planets inside. You wouldn’t be able to put the planets out at their scaled distances though since Neptune would like more than two miles away in this solar system simulation.

We can, however, shrink the distances to a different scale, and stretch them along your hallway! In this setup, Mercury would be 6 inches from the sun, Venus 1 foot away, Earth 1.5 feet, Mars 2 feet, Jupiter 7 feet, Saturn 14 feet, Uranus 28 feet, and Neptune would be 45 feet.

LEARNING ABOUT OUR SOLAR SYSTEM

Clouds of dust. Our solar system was formed more than 4.5 billion years ago from a large cloud of dust. The dust was blasted by a nearby supernova, collapsing the cloud and beginning to heat up. As the cloud collapsed and the rotation got faster and faster, giving birth to our Sun and our planets.

Jupiter the Protector. We own our lives, and the life of many of the planets in our Solar System to Jupiter – the biggest planet. Jupiter sucks up tons of space gunk, keep us (and others) safe from huge asteroids that may have wiped us out long ago.

The 5 Dwarves. Unlike Snow White, our solar system only has five dwarves. Pluto is one of them, being demoted recently from a full blown planet. Why are there dwarf planets? Partly because they haven’t cleared their path in orbit – for Example, there is no other planet orbiting on the same path as Earth. Another reason is they orbit out of plane from all of the other planets!

When were all of the planets in our Solar System discovered? We don’t know dates for many of the planets. That is because there are quite a few that are visible to the naked eye. In fact, all of the closest planets are visible tot he naked eye: Mercury, Venus, Earth (clearly), Mars, Jupiter, and Saturn. Uranus, Neptune, and Pluto (which is now just a dwarf) all required better telescopes for their discoveries. Uranus was discovered in 1781 by William Herschel. Neptune was later in 1846 by John C. Adams, while Pluto was discovered in 1930 by Clyde Tombaugh using the blink comparator (with the real data in the download!). There is talk of a very far away planet 9 that would explain the tilt of our solar system, but we have yet to actually capture it!

Check out our other Kids Science Activities!