How did we discover the planets? Discovering our solar system was no easy task. Astronomers had to compare two different starry skies and find the “stars” that were moving. Of course, these “stars” were not, in fact, stars, but ninja planets moving about silently in the night. With all of those unmoving stars, how can you find a planet? Scientists aren’t too fond of brute force attacks. Finding better, more efficient methods is in our nature. Instead of counting dots in one starry image and checking individually that each dot is in the other image, we invented something called a blink comparator.

Blink comparators flip between the two images quickly, so quickly that your eyes can easily pick out anything that is changing, whether it be a speck getting bigger, or moving across the screen. The blink comparator below that was used to find Pluto used a small mirror that would flip the eyepiece to look at the image on the right, then on the left. In our downloadable STEM activity, you will try your hand at finding planets! We have a bouncy ball sky that has just a single planet in it. See how long it takes you to discover the ball that changed. Check out our online blink comparator to see just how effective this tool is once you have scoured and scoured the sky! 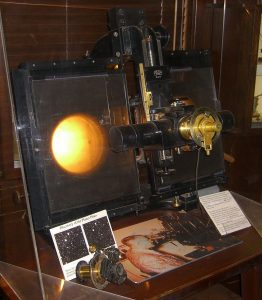 Do we still use blink comparators? In these times scientists don’t often use blink comparators in the same way they did before. Computers do the work for them. By writing algorithms we can be more efficient than human eyes, which can miss faint or very slow moving objects!

Why do they work? Blink comparators rely on our short-term memory. When our eyes see something our brains can remember all of the details for a very short amount of time. By flashing the images quickly we can retain the information of one image and superimpose the other image. This retention is incredibly short, however. Try cutting out the images and shifting your eyes quickly from one to another. Just the mental power required to move your eyes takes away from our memory of the first image!

How else can we find a planet? Comparing starry images of night skies is not the only way to discover new planets. Scientists can also look for shadows crossing over stars, look at gravitational microlensing, and detect wobbles!

When were all of the planets in our Solar System discovered? We don’t know dates for many of the planets. That is because there are quite a few that are visible to the naked eye. In fact, all of the closest planets are visible tot he naked eye: Mercury, Venus, Earth (clearly), Mars, Jupiter, and Saturn. Uranus, Neptune, and Pluto (which is now just a dwarf) all required better telescopes for their discoveries. Uranus was discovered in 1781 by William Herschel. Neptune was later in 1846 by John C. Adams, while Pluto was discovered in 1930 by Clyde Tombaugh using the blink comparator (with the real data in the download!). There is the talk of a very far away planet 9 that would explain the tilt of our solar system, but we have yet to actually capture it!

How was Pluto discovered? Clyde Tombaugh discovered Pluto in 1930 when he noticed that the orbits of Neptune and Uranus were being pulled by some unknown object. After carefully looking at the night sky and comparing images he was able to find the mysterious body – which was later named Pluto!

When was Pluto named? Pluto was named by an eleven-year-old girl over breakfast with her grandparents. The idea for the name then traveled through the grapevine of astronomers and was blessed on the now dwarf planet!

Check out our other Hands-On STEM Activities for Kids!