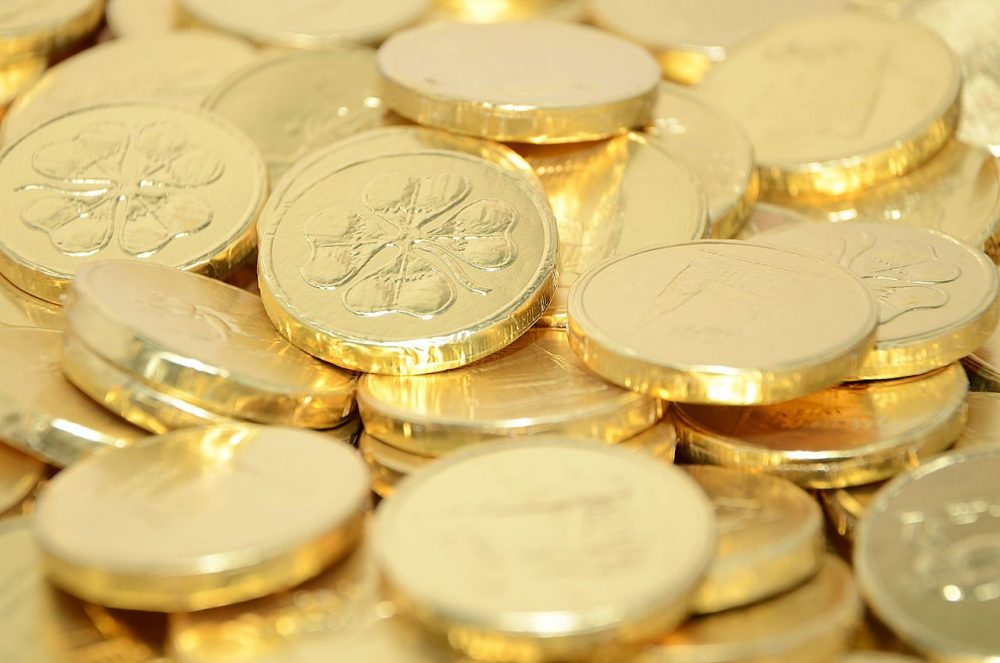 How to test if your Leprechaun gold is real.

All materials have a property called density, and we can use density and volume to determine if an item is what it claims to be. 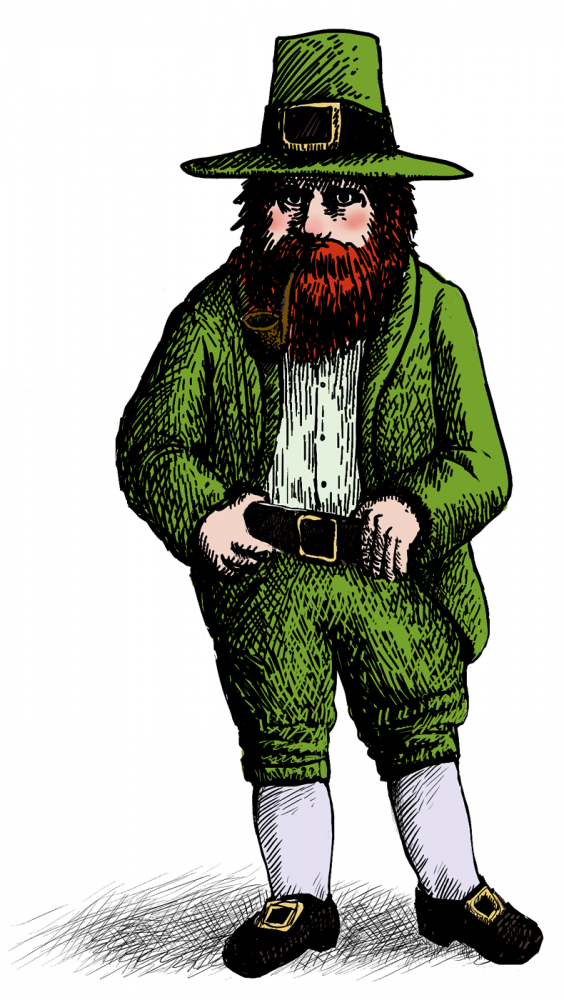 The Leprechauns have been up to their silly antics.

We recently learned how to make a leprechaun trap, and even though they were delightfully engineered those Leprechauns think they can escape by paying us in fake gold! The nerve!

We've developed a test to check if that gold is tasty or not and beat the Leprechauns at their own game. OK, well technically we didn't develop it, Archimedes did. But we will do a similar test in this Leprechaun science activity sure to be fun and delicious! 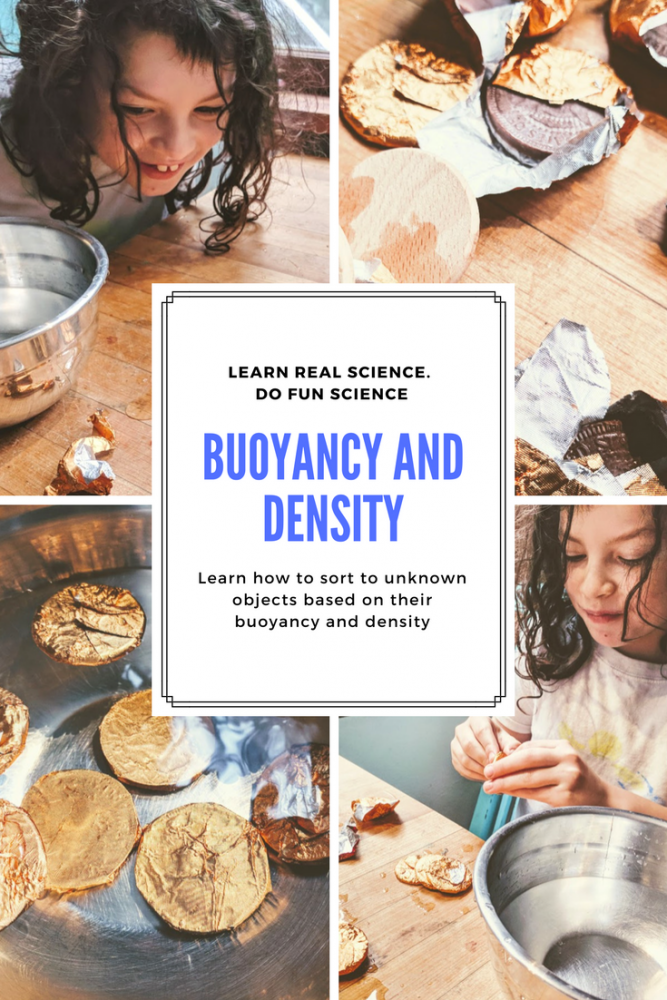 Project Ingredients:
Gold foil wrappers
Chocolate coins (you can often find these in the bulk section of your grocery)
Wood rounds (similar in size to the chocolate coins)
Metal rounds (also similar in size - you don't need both wood and metal, this is just to give you options!)

How to test if Leprechaun gold is real – for young kids. 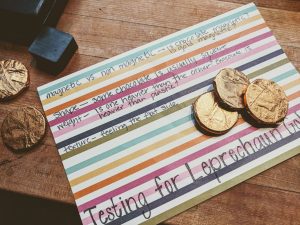 The physics of buoyancy and the math of volume might be more than enough to sizzle out the lights in your kids’ eyes if they are younger. That doesn’t mean we can’t determine if Leprechaun gold is real or fake though. It just means we have to think creatively.

If your kids know that real leprechaun gold is made of chocolate, and you use wood as your fake leprechaun gold, then they should be able to devise an experiment to determine if the gold is real or fake without opening the wrapper.

Encourage them to hold, feel, look at, and play with the pile of mixed real and fake Leprechaun gold – except they aren’t allowed to open it. We certainly wouldn’t want the Leprechauns to get the upper hand! 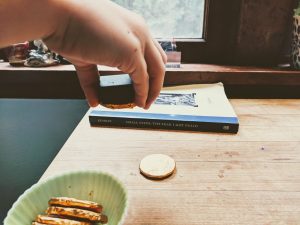 Then ask them if they can figure out a way to sort the coins into two piles. Is there something they notice about one pile or the other? The most likely way for them to sort would be by slight discrepancies in shape or size, as well as the change in weight as the wood pieces will be much lighter than the chocolate pieces.

Next, encourage them to try and think of a way for them to test if the gold is real (chocolate) or fake (something else) in a way that doesn’t open, or harm, the pieces.

Can they use water to investigate the properties? Does pure chocolate, float or sink? What about the coins in their piles?

Can they use their noses to sniff out the real Leprechaun coins?

While my original plan for this Leprechaun science activity was to learn about floating, sinking, and buoyancy, there are many other ways to develop an experiment to test the Leprechaun gold pieces without harming or opening, them in the process. 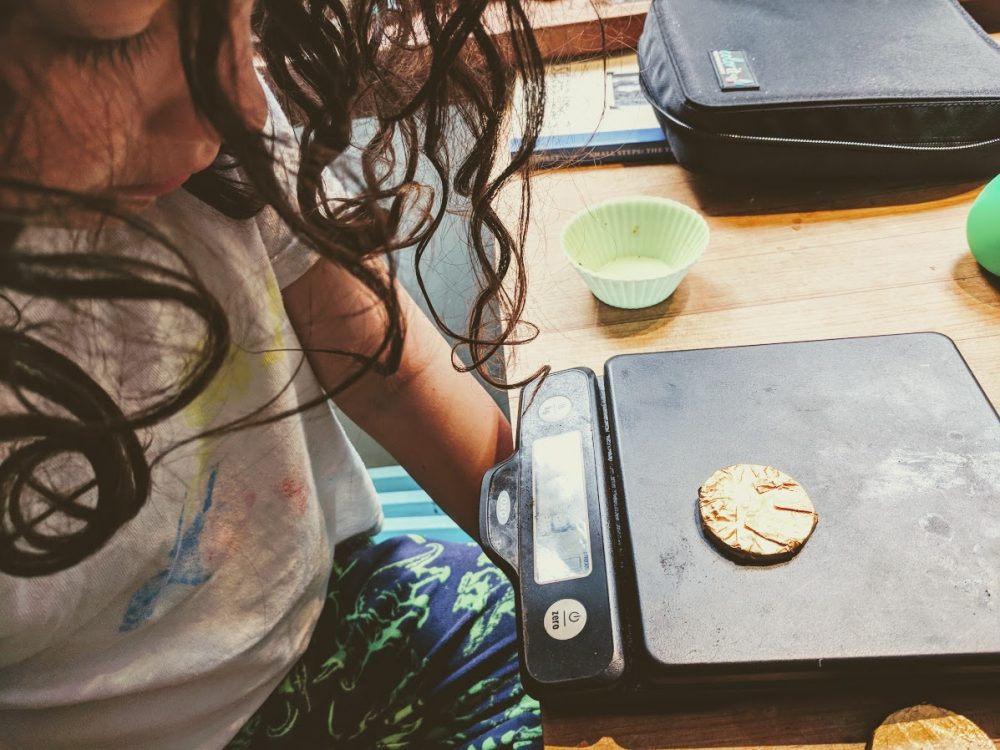 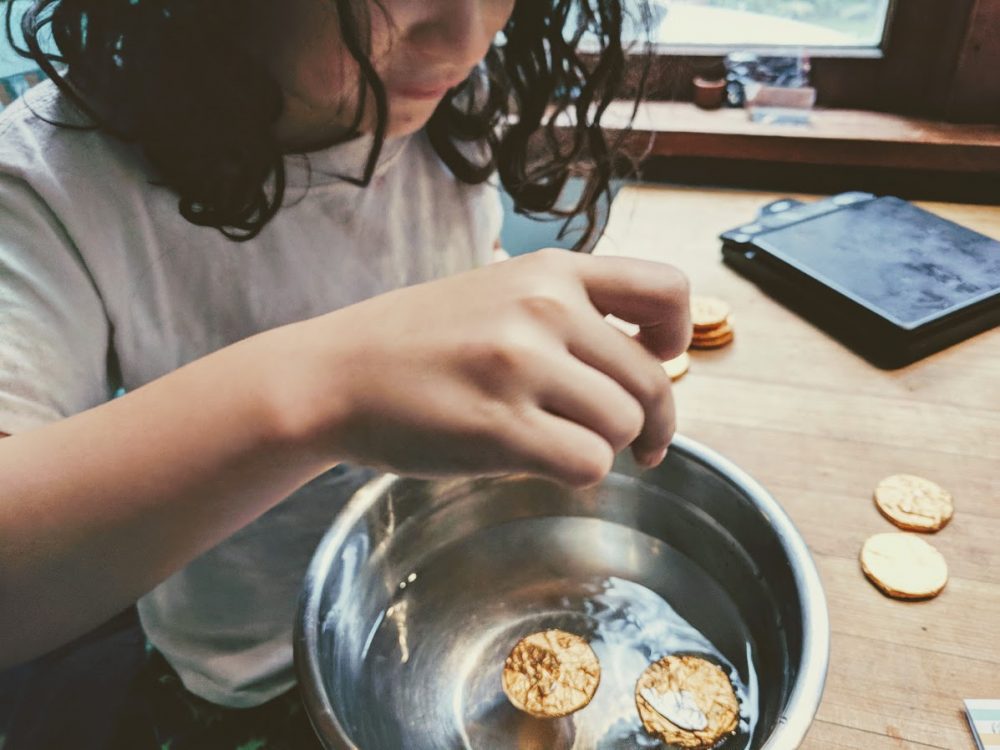 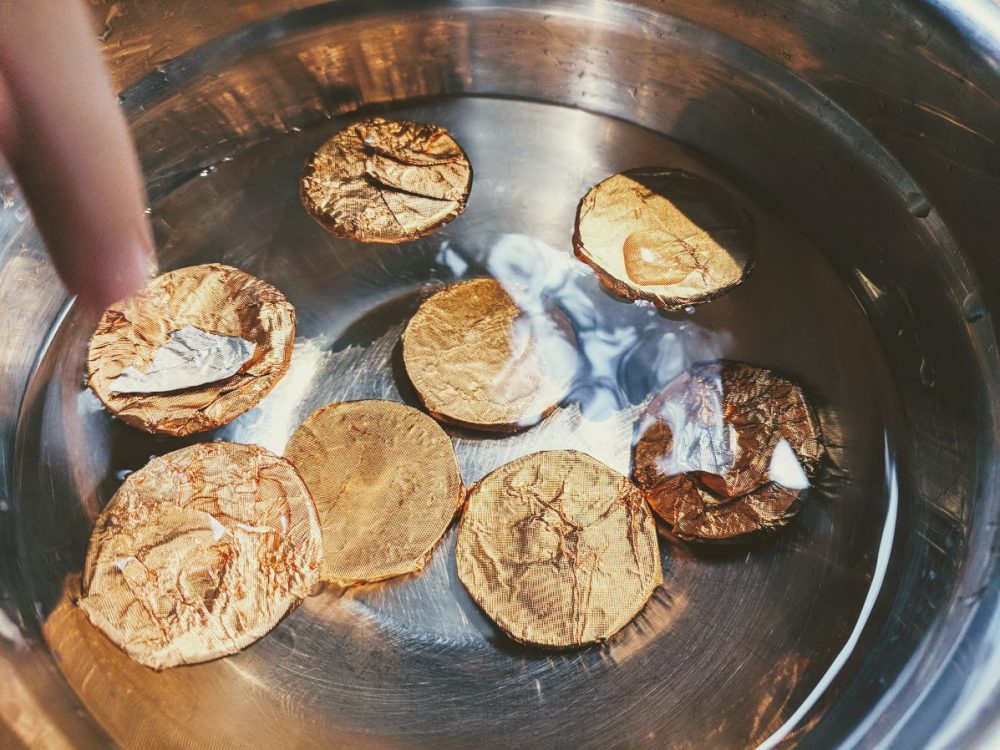 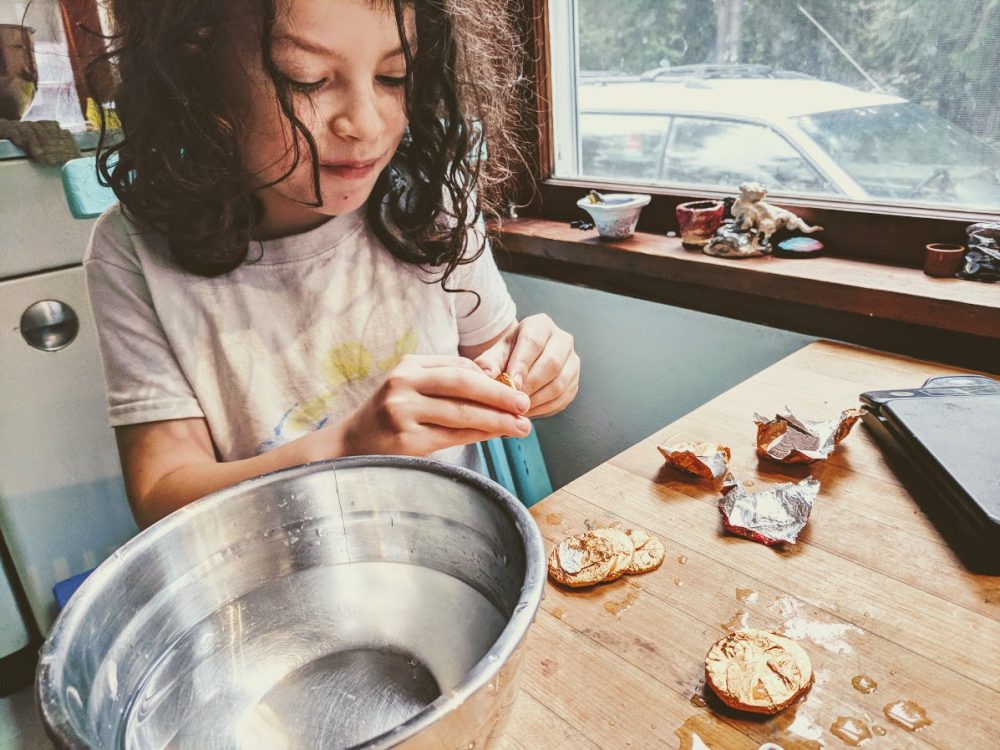 How to test if Leprechaun gold is real - for bigger kids who want to use more math!

All things in this world (and out of this world too), have a density. Their density is related to their mass and their volume. Cotton balls, for example, are not very dense. If we were to weight them we would find they don't weigh much despite taking up a lot of space (volume). A coin, on the other hand, is small but weighs much more.

This relationship can be used to determine what materials an object, like our Leprechaun gold, is made of without opening it.

To do this you will need a scale and/or a bowl of water. We will use the scale to find the weight of the different coins, and the water to look at the volume or the buoyancy of them.

What will the weight tell me?

If we measure the volume and record the weight we can calculate the density and compare it to the chart below. In this way we can use Leprechaun science to figure out if the gold is real or fake, and even better, we can know what it is even before we open the wrapper!

In fact, after looking at the different densities of chocolate, wood, and metal, to you think you could figure out which is which just by feel? I think those Leprechauns aren't as sneaky as they think they are being!

Wait, those densities use kg! What about pounds?

Pounds are a weight, not a mass. Remember, density is mass per unit volume, so we need to use a mass when we are calculating the density. What is the difference between mass and weight? Gravity. Mass is the amount of matter that is there, this doesn't change on Earth or on the Moon.

The weight of an object, however, does change between Earth and the Moon. We would weigh less on the moon because the gravity of the moon isn't as strong, and can't pull on us as hard.

So what can you do? You can use a scale that measures in grams (which is a mass), or you can convert from ounces or pounds to kilograms (kg)! To go from grams to kilograms you will need to move your decimal point over 3 places (or divide by 1000).

How can I measure the volume of my Leprechaun gold pieces?

There are two ways that you can measure the volume of your Leprechaun gold - through math, or through the water.

Better yet you could do it with both and compare your calculations to your measurements just like real-life scientists!

To measure the volume using math you will need to measure the diameter of the coins and the thickness - preferably both in centimeters or millimeters (but choose one and stick with it for both measurements).

Then you can use this formula to calculate the volume:

To measure the volume of your Leprechaun gold through water you will need a graduated cylinder that will fit your coins.

Fill the graduated cylinder to 50mL (this is arbitrary, it just needs to be deep enough to submerge the Leprechaun coin). Drop the Leprechaun gold into the cylinder and record the new water line, which will be higher than before. By subtracting the two you can find the volume of the Leprechaun gold in mL. Then you can use the fact that 1mL is 1E-6 cubic meters to find the final volume in units that are useful!

As you find the volume in the water you might notice that one Leprechaun coin floats, the one that is wood inside. If you are only using wood and chocolate coins, this could be a test to determine whether the coins are real or fake! 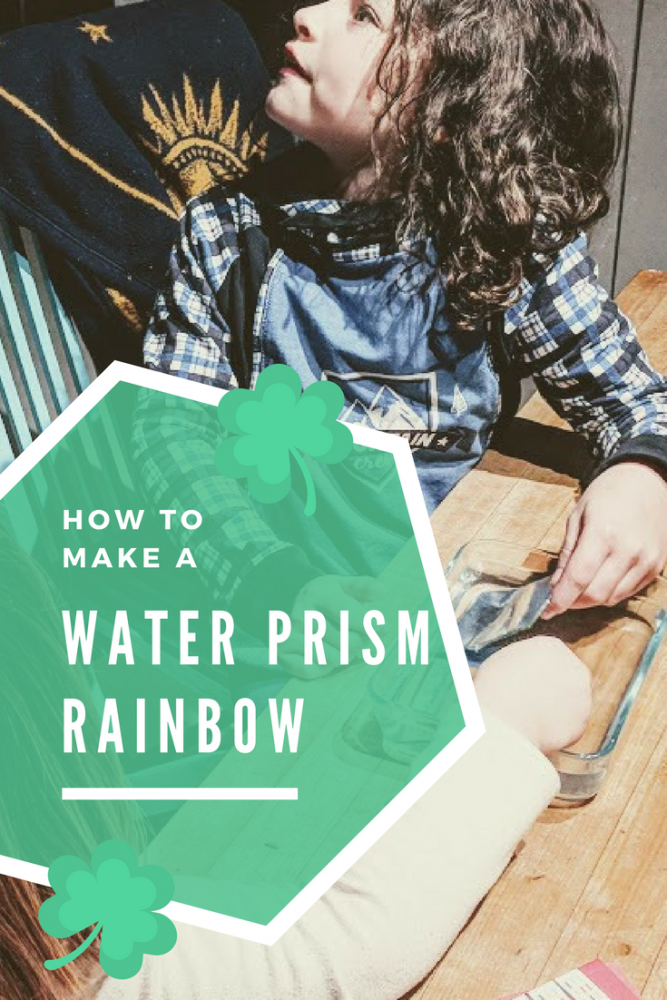 Learn how to make a rainbow 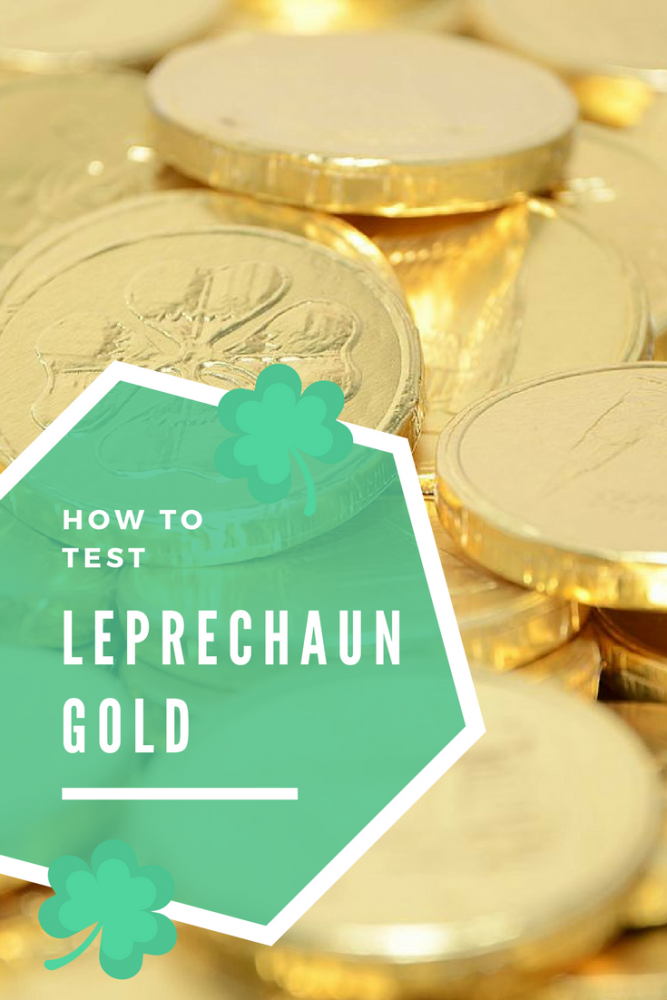 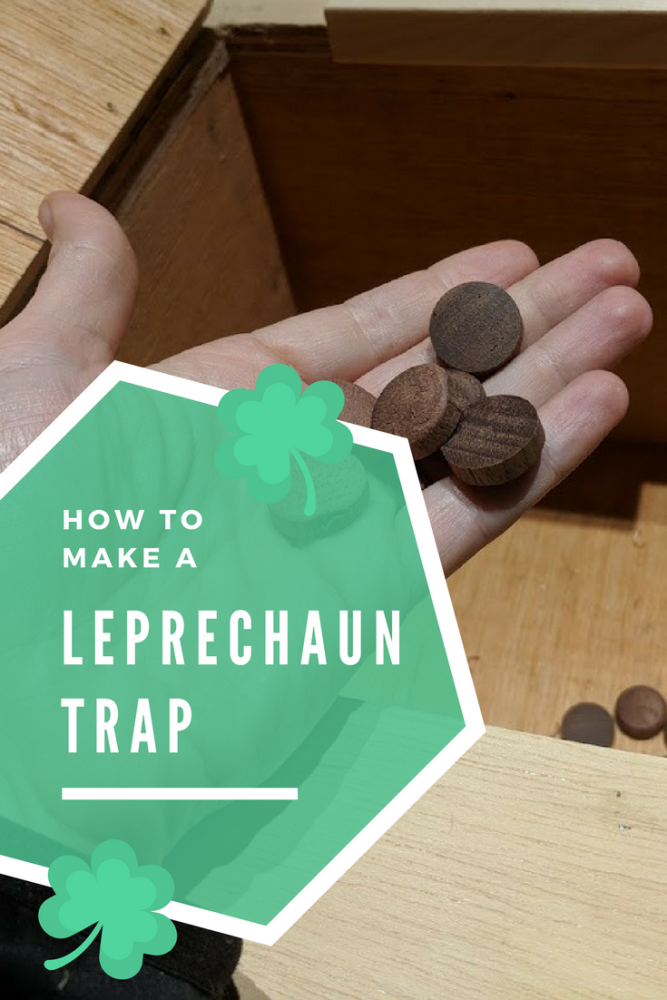