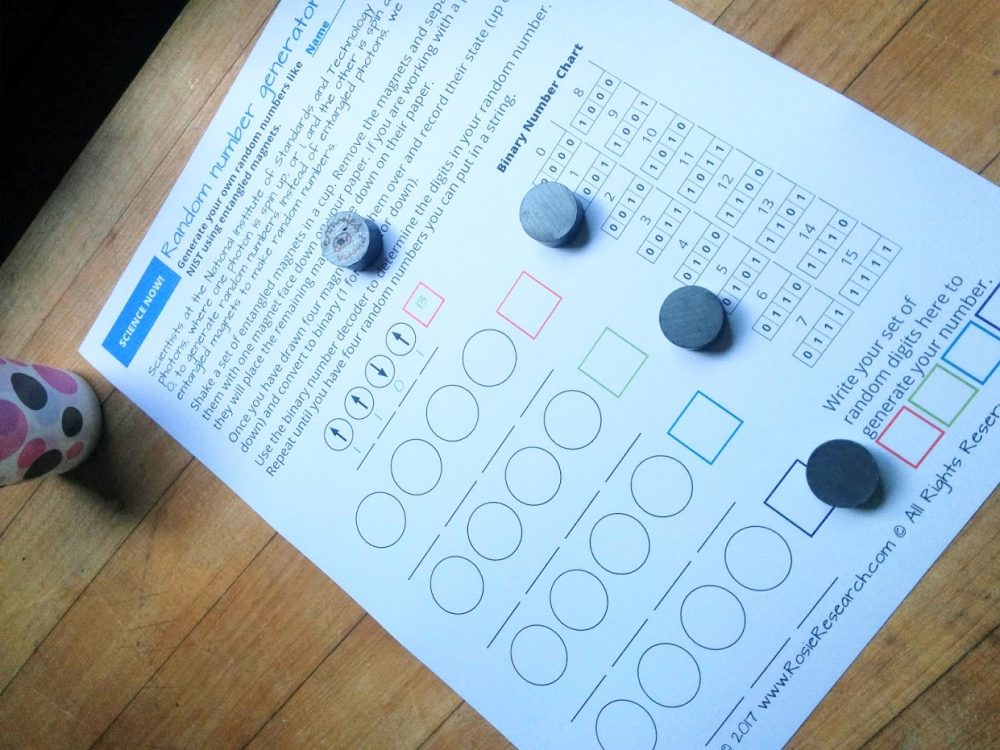 From the National Institute of Standards and Technology to your home. Learn about cutting edge random number generators in this hands-on lab.

How to entangle two magnets and recreate a quantum entangled system of random number generation.

Random numbers are difficult to create, but are necessary to safegaurd our personal information, online passwords, and electronic messages.

A truly randon number generator hit the news recently – which got us thinking about randomness, how numbers are generated, and why random numbers are important.

Add depth to this project by reading our interview with the researcher Dr. Peter Bierhorst!

A hands-on demonstration of quantum entanglement

When it comes to the world of quantum mechanics it is difficult to find a basis of understanding in the real world. Why? Because the quantum world is not only very tiny, it is also very weird – for example, is a photon of light a particle? Is it a wave? Is it both…at the same time?!? What happens if a light particle is whizzing around at mind-boggling speeds near the speed of light?

The New World of Mr. Tompkins by George Gamow is one of my all-time favorites for mind experiments when it comes to the quantum world and a great read if your learner wants to dive deeper.

In this project, we will take a look at how two entangled photons can create the ultimate random number generator. 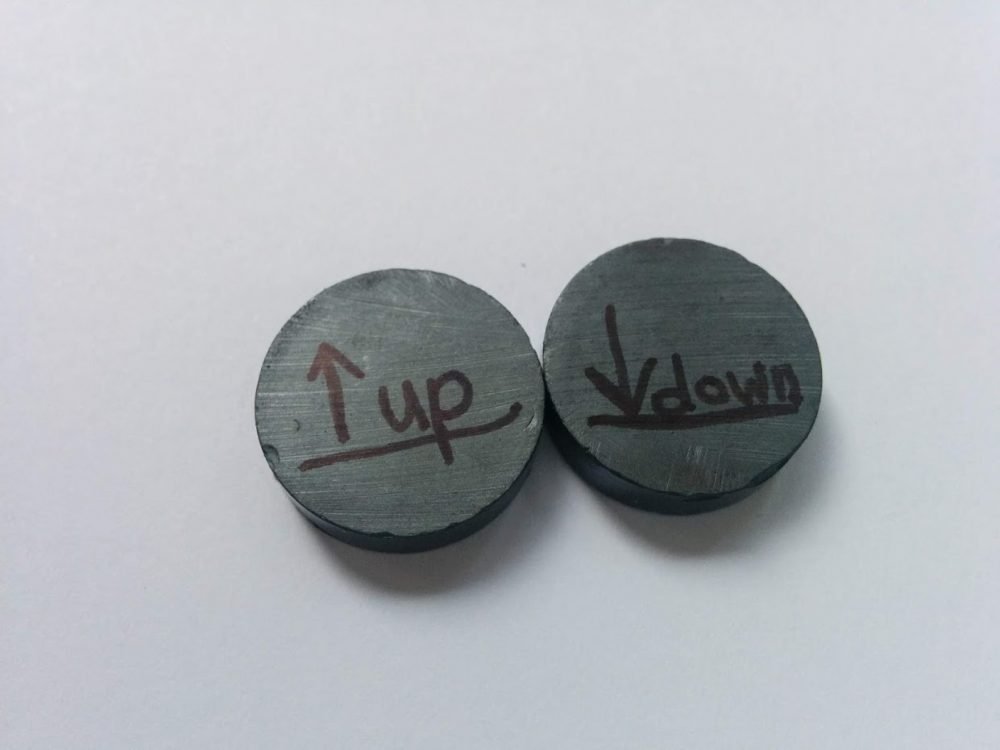 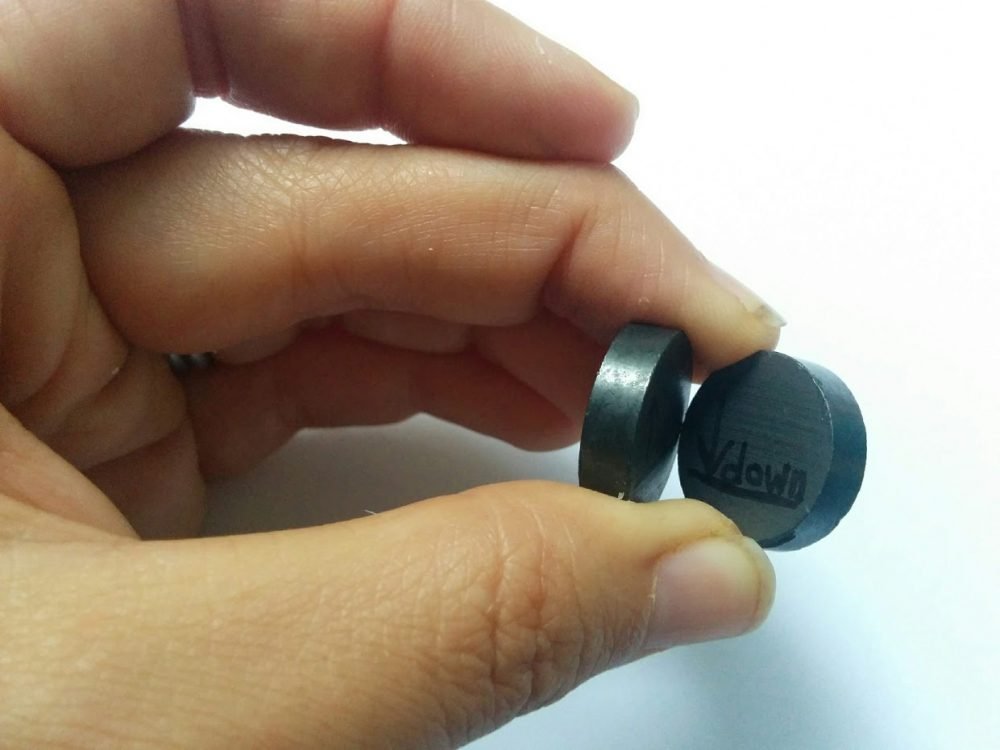 In this project, our ‘photons’ will be round magnets that snap together. Each magnetic pair creates one set of entangled ‘photons’, one spin up, and one spin down. This is a great analogy because magnets have two states, North, and South.

Take two magnets that are snapped together, break them apart, and write ‘up’ on the internal face of one magnet, and ‘down’ on the other. When the magnets are together we should not be able to see which magnet has which state – just as with entangled photons we cannot see which photon is spin up or spin down until we look at the state of one.

In the lab entangled photons are created by pulsing a laser beam at a single, high energy photon inside a crystal. This photon splits into two lower energy photons that are ‘entangled’. For example, a blue photon could be split into two red photons inside the crystal. These red photons are now bound sisters with entangled energies, momenta, and polarization. In these experiments, we use the polarization to generate our signal of 0 or 1. This is because a photon can have two polarizations, up or down. 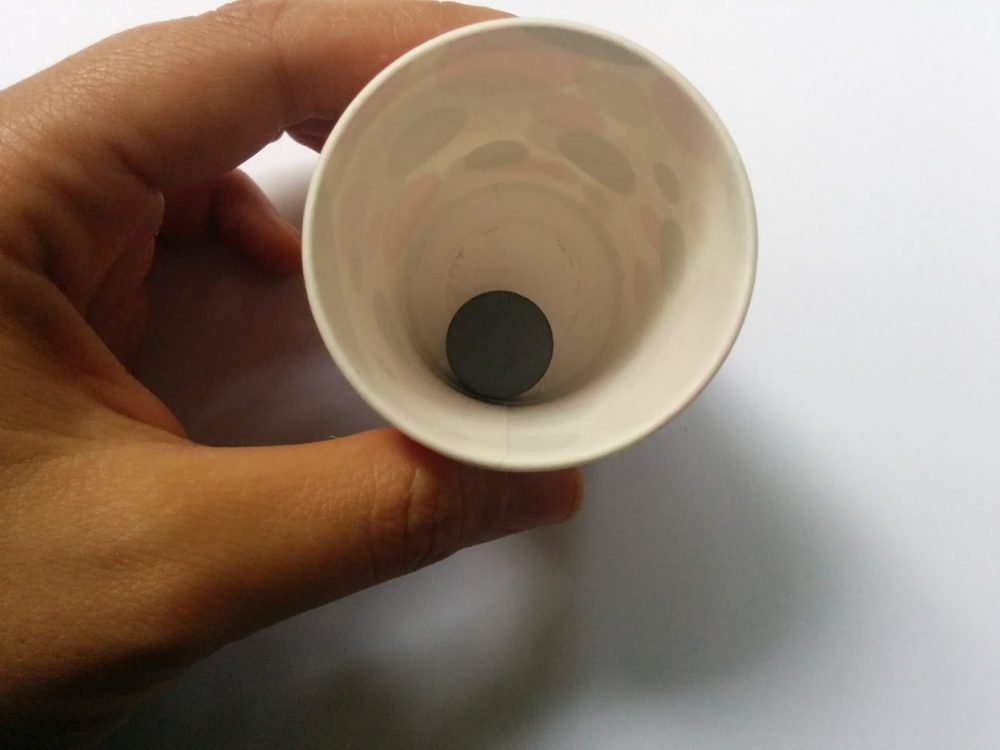 In the lab, a stream of entangled photons is created as a laser beam is continuously shined upon the producing crystal.

We can’t put a bunch of our entangled photons in a bag, shake it up, and draw them out. Can you think why?

Our entangled photons are really magnets. If you put a whole bunch of magnets in a bag together they will just snap together and make a long brick!

To run our experiment we will put a set of entangled magnets into a small cup, shake it and remove it. The two magnets are identical on the outside – that is, you can’t tell which is spin up and which is spin down by looking at the set together (with the writing on the inside).

Open the magnets face down so you can’t see which magnet (or photon) is which. Place one on your paper template, and the other goes to a nearby student.

We need 4 bits of data to make the numbers 0 through 15. That means we need 4 magnets to be shaken and drawn before we can convert the spins to binary and the binary to a number.

Shake an entangled set of magnets, draw them out, and place one magnet face down on each paper. Repeat this until you have filled the four spaces created for the magnets.

The two entangled photons are separated from each other using a beam splitter. A beam splitter is an optical device that can split a beam into two pieces (these can be equally size beams or not, depending on the beam splitter you choose). 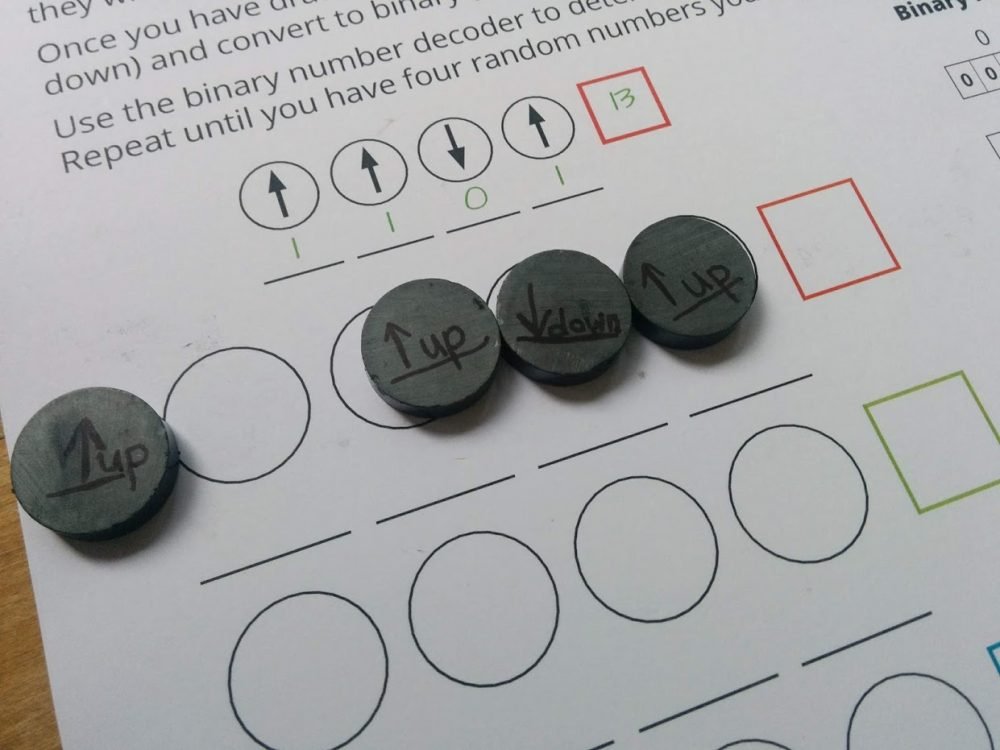 4. Flip over your magnets.

Up until now, no one would have been able to tell you if your magnets are spin up and spin down. Your partner will have the opposite set of magnets. Think about it – if you have an entangled magnet that is spin up, what entangled magnet does your partner have?

Flip over your entangled magnets and record in the circles if your magnets were spin up (with an up arrow), or spin down (with a down arrow).

You now have a series of 4 bits (or 4 zeroes and ones). Use the chart on the left-hand side of the page to discover what number that binary code is represented by. Write this number in the box on the right.

Binary is defined as having two states, here a 0 or a 1. If we want to count in binary we need to do so in something called base-2. Here the number 2 is really represented by the number 10. What?!? How is that possible? In base 2 each digit holder represents a 2^x. So the first digit is 2^0 which is one, and the second digit is 2^1, which is 2!

Print our cards designed to help you count in binary here.

We will need to run our experiment more to be able to create a string of numbers. Use the set of magnets shared between you and your partner to entangle the four sets of magnets, with the writing (spin up or spin down) on the inside, invisible to observers.

Go through the process of shaking the magnets, then separating them face down, one on your paper, one on your partner’s paper. Once you have another set of four magnets face down you can flip them over, record the results and convert the binary to ASCII getting yet another number.

Repeat the process until you have four sets of numbers converted from binary.