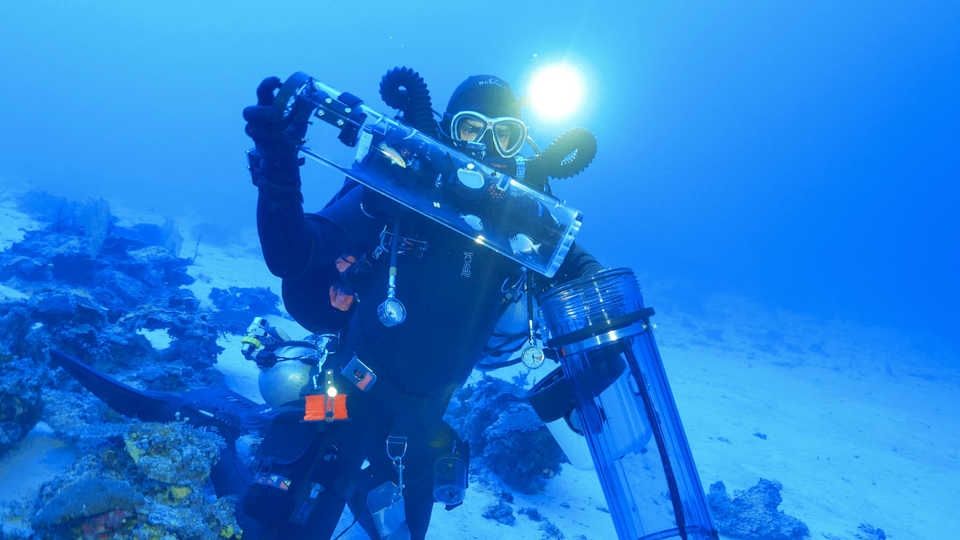 TO SAVE A HABITAT, WE MUST UNDERSTAND THE RESIDENTS OF THAT HABITAT.

We know less about the mysterious part of the ocean known as the twilight zone than we do about the surface of the moon. Academy scientists are helping to change that by exploring this new frontier. – California Academy of Sciences

When it comes to saving coral reefs, there is one glaring issue with understanding some reef residents – access. Deep see residents of reefs can’t be brought to the surface for close examination by scientists.

This is due to a bubble of air fish use to control their depth in the ocean, called a swim bladder. They can expand the bubble in their bladder to rise higher in the ocean, and contract it to sink deeper. This is perfect for fish getting around their neighborhood, but not so perfect when it comes to scientific studies.

Because of that swim bladder, we can’t take deep-sea fishes out of their habitats – doing so would cause the decreased pressure of the ascent to burst their swim bladder and likely kill the fish. Some researchers have had varied success by using a needle to poke a hole in the fish’s swim bladder, preventing the air bubble from getting too large and rupturing. However, this move is very invasive to the fish and doesn’t always work.

The invention that is changing the way we look at, and study, deep sea fish.

Researchers at the California Academy of Sciences and Monterey Bay Aquarium weren’t happy with those options. Instead, they invented their own device that is now proving to be an enormously useful tool – a subCAS.

subCAS is a submersible collection chamber that allows deep sea fish to slowly acclimate to the lower pressures found at sea level. The chamber consists of two parts, an internal chamber with holes in it where the fish are stored, and an external housing made of thick plastic.

Deep sea fish can be collected to the inner container where divers slowly ascend to 180 under the surface. There they insert the fish chamber into the housing, blow a large air bubble into the housing and seal it up.

As the divers continue to ascend to 100 feet below the surface the air bubble blown into the housing will expand, putting pressure on the water the fish are contained in. This increased pressure allows the fish to ‘feel’ like they are deeper and gives them more time to adapt to the lower pressure.

From there the fish are handed off to another team to begin another slow ascent to the surface. Due to this new invention, the California Academy of Sciences and Monterey Bay Aquarium have seen nearly zero fish death due to their ascent from the deep sea. The deaths that have been logged are more of a case of living in a fish eat fish world.

The SubCAS is an important innovation. It allows for detailed study of new-to-science species while they’re thriving outside of their natural habitat. We can gain important insights about fish biology and behavior that we couldn’t obtain otherwise, helping us better understand what it takes to survive in a region as mysterious as the twilight zone. – Dr. Hudson Pinheiro.