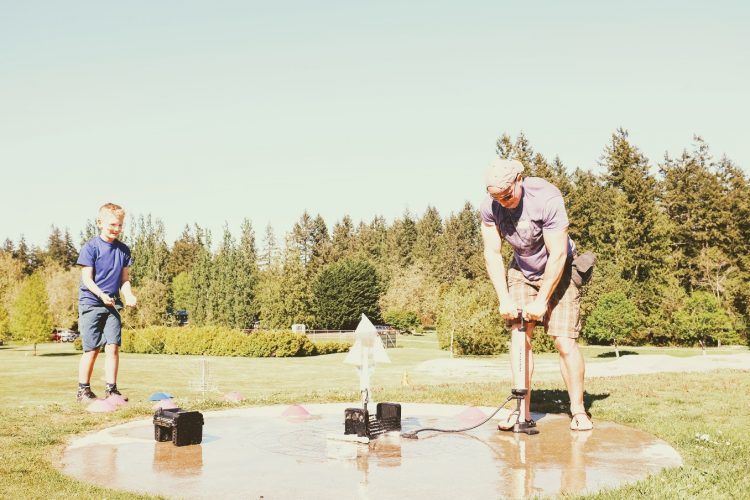 Learn the basics of what makes a water rocket fly high.

How does a water rocket fly high?

What makes a water rocket fly?

This is a great question to ask your kids. During our community science programs, I got a lot of kids saying the bike pump made the rocket fly, or that air made the rocket fly. In reality, it is neither of these. The rocket moves because of the water pushing out of the bottleneck. As water pushes down towards the ground it pushes up against the rocket, allowing it to take flight.

This is because of the conservation of momentum.

Imagine you are on an ice rink with superhuman strength carrying 100 cannon balls. As you throw these cannonballs to your front – which way do you skate?

You would skate backward.

Why do I need a bike pump with my water rocket launcher? 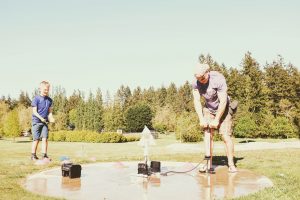 Our water rocket launcher doesn’t just launch the rockets when you put them on the PVC tube. You have to pump a bike pump first, why?

We use the bike pump to add pressure to the bottle. Pressure is defined as the force per unit area. We are pressurizing the air above the water in the soda bottle, which means we are putting a force over the whole surface area of the water in the bottle. This force is what will push the water out of the bottle when we pull the trigger and quickly release the pressure.

This is why a larger pressure, or a more pumped up bottle, will fly higher.

The high pressure corresponds to a larger force pushing the water out. Of course, if you add too much pressure the bottle will not be able to hold it and will explode. Seriously, that happened to us…the top of the rocket (aka the bottom of the soda bottle) gave way because we loaded it with too much pressure.

Why does the amount of water in my soda bottle affect the rocket launch height? 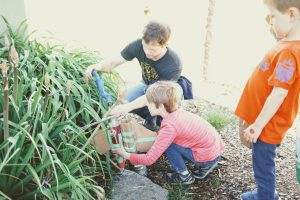 Your soda bottle weighs very little. When we think about the conservation of momentum in our water rocket scenario we need to recognize that the weight of the rocket is always changing.

In the beginning, when water just starts to spurt out, that water is pushing against the bottle plus all of the remaining water. Remember, water is heavy. Conservation of momentum correlates with the mass and the velocity. So the mass of the tiny amount of water spewing out of the bottleneck times its velocity is equal to the mass of the rocket (with all that water) times its velocity. As the mass of the rocket goes up, it’s velocity will go down. That means a heavy rocket is hard to move. The heavy rocket full of water never gets moving too quickly, which means it doesn’t go very high.

When there is a small amount of water in the rocket it will spew out quickly, move the rocket a smidge, and then the whole thing is done. Imagine a water rocket with no water – it would barely move, and the tiny amount it did would only be the pressurized air leaving.

Thus too little water, similar to too much water, makes your water rocket fizzle out. That means somewhere in between empty and full is a measured amount of water that will lead to a maximum height. We find this amount to be somewhere in the 1/3-1/2 bottle range.

How does angle affect the rocket distance?

One of the challenges we proposed in the water rocket activity was to find the angle that gives you the maximum distance of flight. We can look at the extremes of shooting the rocket straight up, which yields no distance, or at 90 degrees (along the ground) which will also yield no distance. So what angle will give you the maximum flight distance?

To discover this angle we can look at the problem two ways, one is philosophical, one is mathematical. The philosophical one can be tested to see if it is true, or correlated with the mathematical theorem.

We know that 0 and 90 degrees both give zero distance. We also know there is a maximum somewhere in between 0 and 90 degrees. If we think about why 0 and 90 have no distance we can surmise what the maximum distance launch angle will be.

When we launch at 90 degrees all of the velocity is up (or in what we call the y-direction). Since there is no velocity moving along land (in the x-direction) the rocket gets no distance. When we launch at 0 degrees we have the opposite. All of the velocity is in the x-direction (along land) and none of it is in the y-direction (up into the sky). Since it never gets up above ground level it can’t get any distance. Using this logic can you think of an angle that might work to get a maximum distance?

45 degrees. When we launch at 45 degrees we get an equal amount of velocity in the x and y-directions, which gives the rocket lift to have time to move across the land.

We can also prove this mathematically using Newton’s equations of motion. You can find a derivation here if you want to see the mathematical steps.

1 thought on “How does a water rocket work?”