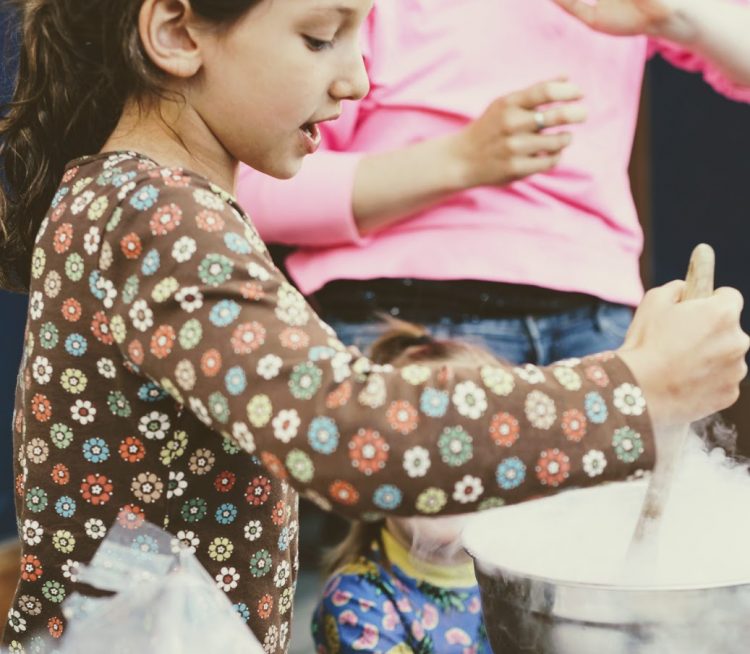 How to make ice cream that tastes fizzy

We can use many things to make homemade ice cream: an ice cream maker, rock salt and a bag, or very cold elements like liquid nitrogen or dry ice.

Interestingly, it is not the bubbles actually popping on your tongue that leads to the fizzy sensation like you might imagine. We discovered this back in 2013 when a team of scientists discovered people still describe soda when they drink it in a pressure chamber, set at a pressure such that the bubbles won't actually pop.

So while our homemade ice cream won't have popping bubbles like soda, it will still taste fizzy on our tongue. You can find out why that is below.

You won't need much out of the ordinary for this homemade ice cream recipe. In fact, if you have a favorite ice cream recipe already you can use that recipe and just use the dry ice instead of an ice cream maker or rock salt for the freezing process to turn it fizzy.

You can find dry ice at most grocery stores - just ask te meat department if they have any. If they don't, they will often know where to direct you to. Dry ice usually costs somewhere between $1-$2 a pound. I always err on the side of too much dry ice as you can let your kids play with the extra after you make the ice cream, but it is a pain to get half way through making your ice cream and find out you don't have enough.

How to make ice cream that fizzes on your tongue.

In a bowl, you will want to mix together your ice cream mix. We used a pint of heavy whipping cream, a pint of regular cream, and about a cup of sugar as our base. You can add more or less sugar to taste, as well as add a favorite flavoring to taste. Want to make mint ice cream? Crush up some mint leaves and add in some peppermint extract! Want to make vanilla ice cream? Add a few teaspoons of vanilla extract. With this method, it is easy to see how to make ice cream from a base with many different flavor varieties. 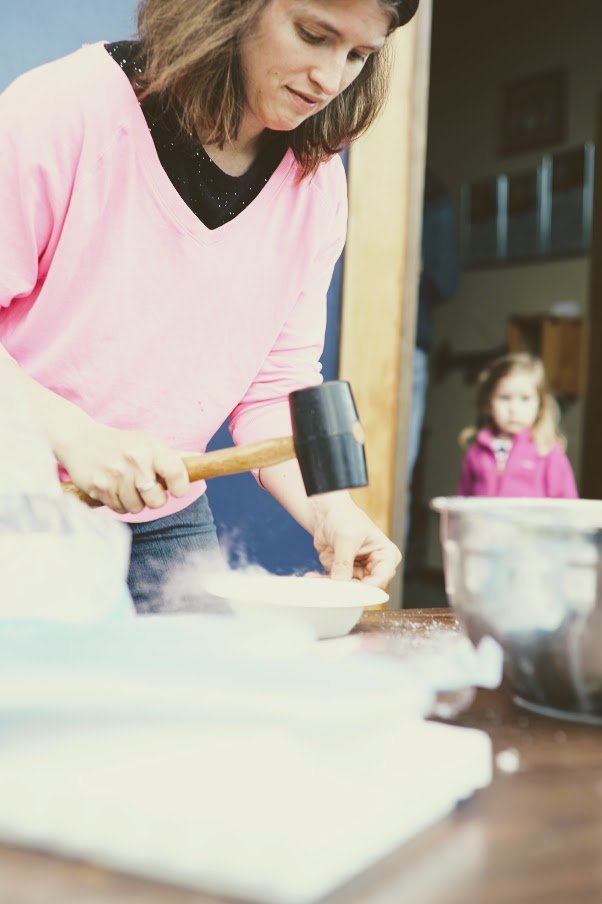 We don’t want chunks of dry ice in our ice cream. One reason is that it an increased surface area will cool our ice cream mix faster and bubble more, creating fizzier ice cream. Another, more safety based reason, is that we don’t want to serve anyone ice cream with chunks of unmelted dry ice in it. You can use a blender or mallet to pulverize your dry ice blocks into a dry ice dust. 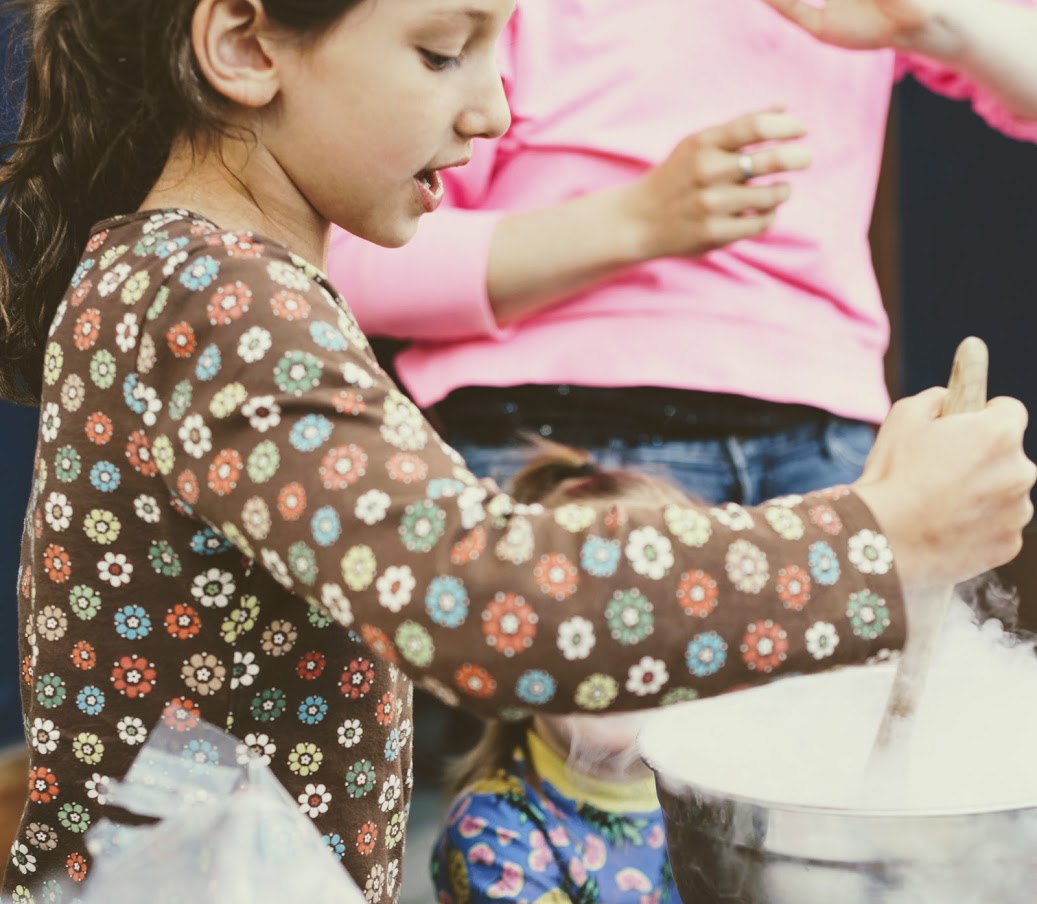 4. Create ice cream by adding dry ice to your mix

Now that we have our liquid ice cream and our crushed dry ice we are ready to combine them to make delicious ice cream that tastes fizzy. One very important note: use a much larger bowl than what you think you will need. The ice cream mixture will bubble/foam up with the bubbles that the dry ice releases. This is due to the lipids in the ice cream. If you use a bowl that just holds the ice cream mix you will have a battle on your hands to keep it contained. 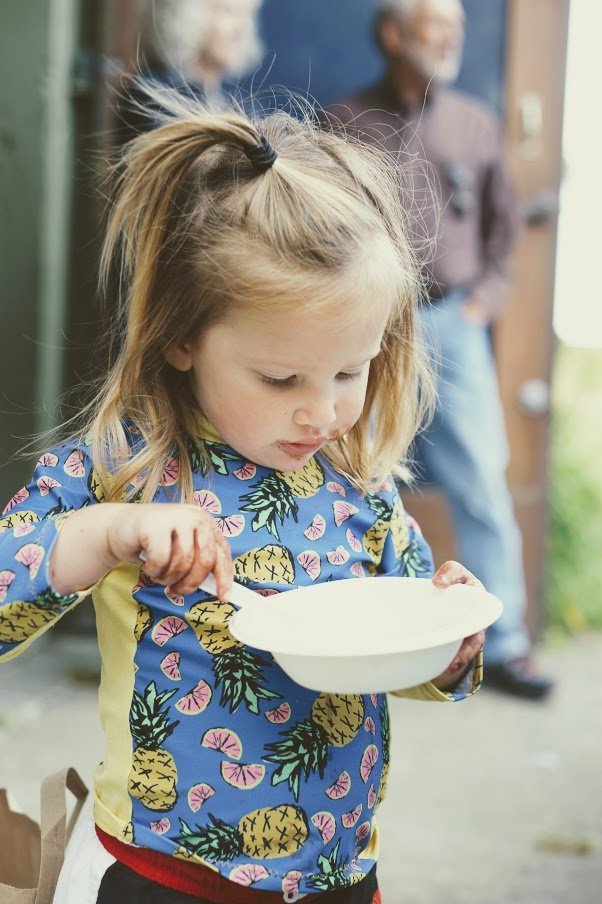 This is probably my favorite step in this tutorial on how to make ice cream. Once the ice cream has formed you can eat it, just be sure to check for any large or small chunks of dry ice. If you find dry ice chunks you can just wait for a little as the newly formed ice cream will try to warm up, and thus sublimate the remaining dry ice.

Note: Do not store dry ice in your refrigerator or freezer. The sublimated carbon dioxide (the released gas) can be harmful to the various components.

Why does your homemade ice cream taste fizzy?

We mentioned earlier that despite the lack of popping bubbles in this ice cream recipe, the ice cream would taste fizzy in the end. While the fizz isn’t as strong as it is for soda you can still clearly feel it. Why?

Part of the fizzy sensation we get when we drink soda is from the bubbles popping on our tongue. Another part is due to our taste buds. Scientists discovered this after having subjects describe drinking soda when in a pressure chamber, when the bubbles wouldn’t pop, and they still described it with a fizzy sensation.

This was perplexing to researchers (and likely you) who originally through the fizz was all about the bubbles. As they dug deeper they learned that our sour taste buds can also detect carbon dioxide. These sour taste buds are coated with a special enzyme called carbonic anhydrase that reacts to the presence of carbon dioxide and sends those signals to our brain.

Why would we want to sense carbonation?

It is a bit perplexing that our tongues evolved to sense carbon dioxide through an enzyme on our sour taste buds. Why would we benefit from such a tool? Carbon dioxide detection in food could have evolved as a way to sense fermented foods. While we now adore all sorts of fermented foods like kimchi, miso, Keifer, or kombucha for instance, often fermentation of foods is a sign of old age. In the past, the ability to sense fermenting foods could help you avoid rotten foods that were rife with bacteria that could make you incredibly sick.

Why does the ice cream create so many bubbles as you mix it?

You might have noticed that adding the dry ice to your ice cream mix make a lot of milky bubbles. The dry ice is extremely cold, so as you add it to the warmer ice cream mixture it goes straight from a solid to a gas (similar to putting ice in such a hot situation that it skipped melting into water and went straight to steam). A gas takes up more room than a solid so you get lots of expanding bubbles.

This is a fun thing to look at in water as it makes the water seem to ‘boil’ as the dry ice creates tons of bubbles that then pop to make a smoke. When you add dry ice to water, however, those bubbles continually pop. They don’t seem to make huge raspberry bubbles that keep growing and growing. Why does this happen with the ice cream?

Unlike water, the cream in our ice cream is filled with tons of lipids (or fat). These lipids are stretchy and sticky which prevents them from popping very quickly. Instead, the bubbles stick around and start to pile up. This is why you need a much larger bowl than you might think!

If you wanted to make sorbet, a treat similar to ice cream but lacking the creamy fats, you won’t have this bubble issue.

Why do I need a plastic bowl and a wooden spoon?

Dry ice is cold. -109 degrees Fahrenheit cold. For comparison, 0 degrees Fahrenheit is where water freezes. Handling dry ice with your hands for more than the blink of an eye can burn you, which is why we always wear protective gloves with dry ice. Think about what would happen if we put dry ice in a metal container. While this wouldn’t hurt the container, it would be incredibly cold if we handled the container. Metal is a thermal conductor, that means it transfers heat (or cold) very well. By using a plastic bowl we are insulating the dry ice from our hands. The same goes for the wooden (or plastic) spoon. If it were metal it would get very cold, potentially dangerously cold, as we stirred our homemade ice cream recipe.

We hope you enjoyed learning how to make ice cream that is fizzy with us!

Send us your photos so we can share it with our family of learners!