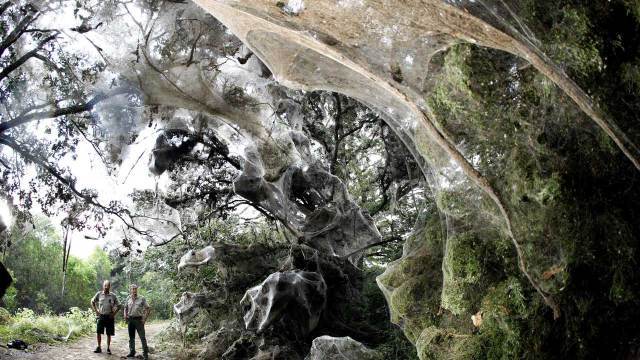 Thousands of Spiders Spinning Together.

If you are even remotely scared of spiders be sure to side step Dallas. Thousands of spiders have come together to create an enormous communal spider web. By enormous, we mean nearly 300 feet long and 40 feet high.

What is most odd about this finding is that spiders are typically solitary creatures. Many types of spiders, in fact, will fight with others to maintain dominance over their spider webs. This isn’t the first time Dallas has seen these giant spider webs. One was also found in 2007. The spider builders that time were the Tetragnatha guatemalensis.

These are more than just lots of webs spun near each other. These giant spider webs are created together as one huge web. Since they are made together, instead of many parts to a whole, scientists are referring to them as communal webs.

Assuming this new communal spider web is from the same species, we have no cause for concern. This type of spider is not aggressive to other spiders, a trait that lets them make these giant spider webs in the first place. They also are not known to bite humans. A trait that, let’s be honest, is the most important to you and me.

In fact, these giant spider webs have an up side. Scientists believe they are forming because of such a large bug population this year. The communal web means more bugs for them, and less for our back yard bar-b-ques. I think that is one thing we can all agree is a good thing! If you find a giant spider web be sure to look and enjoy, but keep from tearing them down!