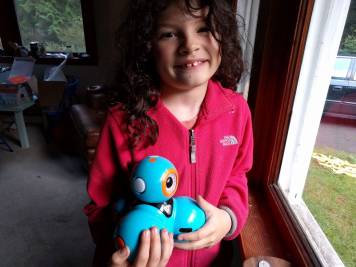 Cost: ~$150 (here’s an Amazon link to check current prices)Age Range: 6-8+ Software: App based (iOS or Android – double check your device is compatible)Our overall impression: The Dash Robot is fun to play with, and can be used to code, but there are other robotics for kids that we enjoy more.

The Dash Robot by Wonder Workshop has been around for nearly five years. This little robot was one of the first on the market to bring fun, interesting, Blocky programming to a good level for kids. I like the different programming options they have in the app, which allows the robot to grow with kids, but I wish there was more building the robot involved. Below is a brief synopsis of my Pro and Con list for the Dash robot, with an expanded version below.

Overall, the Dash robot is a decent buy. You can use it to learn to code with Blocky programing and it is cute with a silly personality. Ultimately, however, I think you can use the same amount of money and get more bang for you buck in this age group with something like the mBot Ranger which has similar fun programming options but also lets you build the robot as well.

Pros of the Dash robot:

I like the levels of programming ability with the Dash Robot

Wonder Workshop, like MakeBlock, has a great app based programming suite for kids. Kids can use the robot as a remote control car, they can draw a path for the robot to follow, or they can use the apps blocky programming. As far as I know, that is the end of the programming path for Wonder Workshop. Which means kids who want to take the next step to Python or C++ can’t actually go from the block to a command screen type of layout like you can with MakeBlock. While this could be seen as a drawback, I also think that kids will age out of this robot by 9 or 10, which means such a feature might not be necessary since interested kids will be off onto more difficult robotics projects.

I like the games in the Wonder Workshop app

I like the durable body of the Dash robot

We have some robots in our house that can not be just tossed around. Not that you want to throw the Dash robot into the toy bin while cleaning up, but it is nice that you won’t need to worry about Dash if you pick it up by the head. Since it is made for younger hands, the Wonder Workshop team did a great job creating a robustness in the Dash robot that will let even toddlers play with it, and not break it.

Cons of the Dash robot:

The Dash robot can have connectivity issues

There is nothing more frustrating than pulling out the Dash robot and not having the right device with you to be able to play and program. The Dash is never super happy about connecting to our iPad (which, to be fair, is the first generation). It also has an odd, and specific list of devices it will connect to – so I suggest triple checking to make sure you will be able to use Dash in your home without such a frustration.

This is in the con list because I HATE thinking I have a fully charged robot only to find out it has nothing in the tank. Dash can burn through its battery, and sometimes can fail to hold a charge (which is the source of pretty much every single negative review on Amazon). Since the robot is very much a ‘black box’ getting in there and replacing the LiIon battery yourself for a better option, as I did with the mBot Ranger, is not possible.

You can buy the Dash robot alone or together with Dot (which I don’t have, but have heard is not really necessary). Alone, the Dash robot is about $150, which is no small chunk of change. Then you can purchase the add-ons. I feel like this is Wonder Workshops way of upselling you at every single corner. Want to be able to add Lego bricks to the Dash robot’s head? There’s an accessory for that. Want to be able to attach a marker? Another accessory, which even has odd triangular markers. From being able to play music to throwing a ball, there is an accessory for that too.

Here’s the thing. I feel like not only do these add up, they also rob kids of the ability to see themselves as Makers. It shows them a polished final product that will do exactly what they want without having to engineer anything. Sure, as parents we can say ‘go build a plan to have Dash hold a pen’ but I know that most parents won’t. Dash is not all that welcoming to kids building upon it, and their suite of accessories points to that, in my opinion.

If you have read my reviews of other robotics for kids you will find a common thread in many of the reviews. The black box. So many of these robots are shipped completely built and ready to go, which to me means it is only half of the robot experience. Kids get the chance to interact and program the Dash robot, but they don’t have a chance to learn basic building techniques (like how to use a screwdriver, how to read diagrams, or how to organize parts). While I like the Dash robot, this, along with the other items listed above, are why I don’t love the Dash robot.