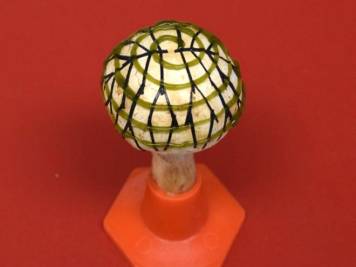 Super Mario Brothers is a long-loved game where magical mushrooms can give Mario or Luigi extra powers. While these mushrooms won’t give you extra powers, they might be able to give your house a little extra power.

We can thank our mushroom power to a few things: the mushroom, some tiny bacteria, 3D printers, and graphene nanoribbons.

That might seem like an eclectic combination of things, but it turns out that they are just the ticket to creating clean energy! Why those four items? Each piece plays an important role.

The mushroom provides life. Literally. The mushroom is the base of the whole operation. It provides a cool, but not cold, moist, but not wet, nutritious, but not toxic environment for our tiny bacteria to live on. Without the mushroom, the bacteria would die long before we could harness any electrical energy from them.

The tiny bacteria provide the electrical current. As light hits these miniscule cyanobacteria they go through the process of photosynthesis that converts carbon dioxide to oxygen and produces free electrons at the same time. These extra electrons, if harnessed, can create a tiny electrical current to power a light bulb.

The 3D printer helps adhere the cyanobacteria to the mushroom. In fact, the researchers found that printing colonies of the bacteria in specific areas increased the power production of the bionic mushroom eight fold (8x).

The currents created by the bionic mushroom are tiny at the moment. But this first trial has given proof of concept, and there is a ton of room for optimization. For example, bioengineering the cyanobacteria to be more efficient photosynthesizers could allow scientists to power a small LED with this technology.

“It’s a new start; we call it engineered symbiosis. If we do more research in this we can really push this field forward to have some type of effective green technology.”