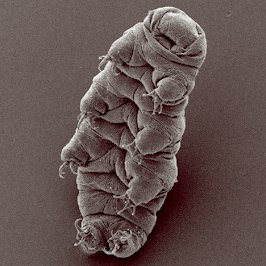 Space is a harsh environment.

To date, there is only one species on our planet that was found capable of surviving the vacuum of space – the water bear. In fact, in 2008 scientists put water bears in space for ten days with no protection. Once they returned home and given water, the water bears came to life, and hatched live eggs! What is, even more, is the range of environments the water bear can survive in.

The water bear’s resume is impressive indeed. It can survive from the vacuum of space to pressures six times greater than those at the bottom of the ocean. It can also survive in temperatures from absolute zero to survive in boiling water. And lethal radiation or a century-long lack of water can not deter the water bear.

How did water bears develop the skill of surviving the vacuum of space?

Obviously, this incredible resume of survival is one to be envied. Scientists have been looking to find how the water bear has accumulated all of these tools over time. It turns out, there is one other unique trait to the water bear. It has the most foreign DNA of any animal.