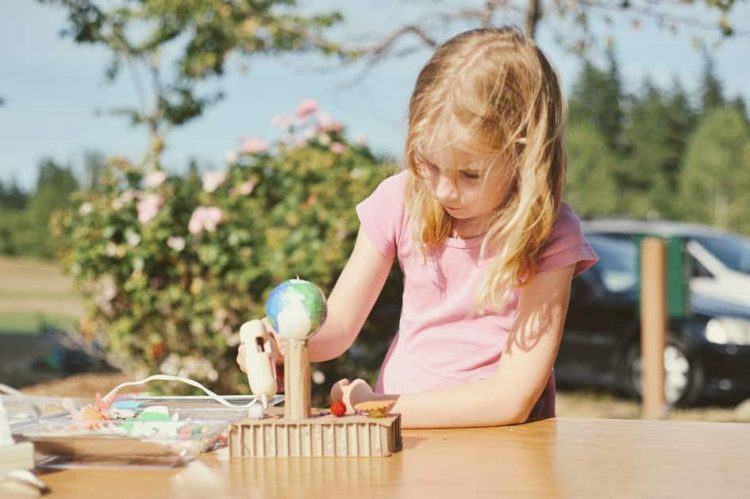 How solar eclipses happen, and why they are rare.

The solar eclipse is the moon travelling in front of the sun and fully covering it.

This past summer the moon slowly moved infront of the Sun, fully blocking sunlight from reaching Earth in a band across the United States - an event known as a total solar eclipse. As the moon's shadow swept across the nation, millions of people got to experience darkness during the day, the silencing of the birds, and crescent-shaped shadows.

In this mini Maker activity, you will get to recreate the 2017 Solar Eclipse using tp tubes, styrofoam balls, a hanger, and a flashlight! I love that you can actually see the moon's shadow traveling on Earth, and investigate how the height of the moon above or below the flashlight-Earth system changes the look of the eclipse!

LEARNING ABOUT A SOLAR ECLIPSE

When is the next solar eclipse?
The next total solar eclipse is happening in Argentina on July 2, 2019. The United States will not see another solar eclipse, however, until 2024!

Why doesn't a solar eclipse happen with every new moon?
The Earth and Sun orbit each other on a plane, called the ecliptic plane. The moon, however, does not orbit the Earth on this plane, instead, it is slightly skewed. Thus, sometimes during a new moon the moon is too high to cover the Sun, other times it is too low, and only a few times is it just right to cover the Sun and create a total solar eclipse.

How have solar eclipses impacted history?
The son of William the Conquerer, King Henry the First, died at the same time a four-minute long solar eclipse happened. This was during a time that solar eclipses were not widely known about or predicted, and the darkness was said to haunt the hearts of men. As the kingdom came out of the darkness, a brutal struggle for the throne began.

How does a solar eclipse affect animals?
Solar eclipses don't affect nocturnal animals. During the day nocturnal animals are sleeping, and the drop in temperature and light won't wake them up since it lasts a very short amount of time. Daytime animals, however, will quiet down thinking that night is falling. For example, birds will stop chirping during a solar eclipse.

Goodbye Moon, Goodbye Eclipse. Will solar eclipses happen forever?
Did you know the moon is slowly going away from the Earth? Reflectors placed on the moon during our lunar landings have allowed us to measure the relative distance between the moon and the Earth. That distance is getting larger and larger. OK, it's not that bad - the distance between us increases by about an inch and a half every year. Tides on Earth slow the rotation of the Earth making our days ever so slightly longer. Earth's slower spinning is compensated by the moon speeding up (this is called the law of conservation of angular momentum). As the moon speeds up it slowly increases its orbital distance and looks smaller in the sky.

There will be a time when the moon has become too small to fully block the sun. What does that mean for total solar eclipses? It means total solar eclipses won't ever happen again on Earth. Just how long do you have to catch a solar eclipse before they are extinct? More than 600 million years - so you've got some time...