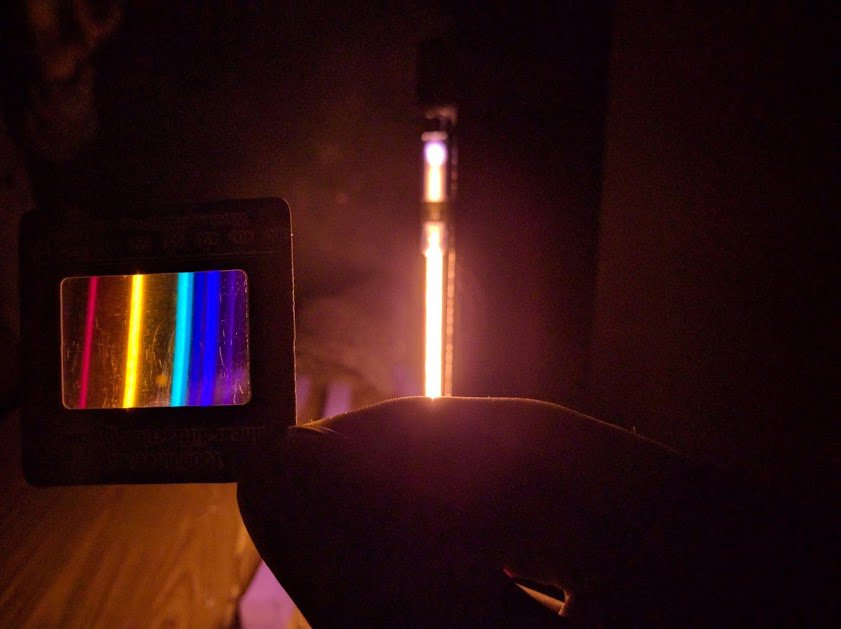 What our sun is made of and how we discovered what is in our sun.

We can look at the colors of excited gasses, or spectra, to determine what elements our sun is made of.

Our sun is packed with cultural, scientific, and religious stories. It is also the most important source of energy for life on Earth. Nearly a perfect sphere, the Sun gobbles up 99.86% of the total mass of our solar system. About 73% of the sun is hydrogen, while 25% is helium that has been fused from that hydrogen. Heavier elements make up the rest, elements that have also been fused together in the core. Heavy elements in the Sun include oxygen, carbon, neon, and iron. How do we know the solar composition?

How do we know what the Sun is made of? At one point we couldn't look up the solar composition online or in a book. Nor could we go out and take a sample. How can we discover the elements and the quantities of these elements in the Sun? Scientists look at it. No, not with their eyes (ouch)! Instead, they look at the Sun through special spectrometers that break the sunlight up into all of its colors.

Water droplets in the air break sunlight into a rainbow in a similar fashion, except these spectrometers can see individual colors as lines. The solar spectrum is the sum of all the lines scientists see when looking at the sun. Once we have a solar spectrum we have to assign various lines to gasses, and we did that through a very long arduous process - but looking at the spectra of burning gasses and comparing it to the solar spectrum.

You will have a chance to see the solar spectrum at varying levels of difficulty in this STEM activity. Can you figure out which elements combine to make a specific set of lines? You will need printable transparencies to make the puzzle pieces, since they overlay, in addition to the STEM worksheets below.

LEARNING ABOUT OUR SOLAR COMPOSITION

How big is our Sun? How dense is our Sun?
Our sun fits 1.3 million Earth-sized balls inside of it and has a mass 330,000 times that of Earth. The Sun's core is incredibly dense, coming in at 150,000 kg per cubic meter (hence how a teaspoon of the sun weighs a ton). As we go out through the radiative and conductive zones this density drops significantly. So significantly, in fact, that the edges of the sun are less dense than our own air!

What element was discovered on the Sun?
Scientists were eluded for many years by one set of spectral lines. While many of the gasses in the sun learned about by comparing the Sun's spectrum with a wide variety of gas spectra, there was one set of lines that scientists still couldn't assign to anything. For years this went on until humanity discovered Helium through an experiment with rocks (yes, rocks!). It may be surprising that we had not seen helium before, as it is the second most abundant element in the universe, but helium is very light, and not gravitationally bound to Earth, making it very hard to find naturally on the ground.

Does the Sun burn like a fire?
People think of the sun they think of a super hot burning ball of plasma - but the Sun doesn't burn. Burning requires oxygen consumption during the reaction, and oxygen doesn't make up too much of our sun. So how does the sun get so hot? Through nuclear fusion. The core of the sun is so energetic that it can actually take the nuclei of two hydrogen molecules (basically two protons), and shove them together so hard that they forget they are hydrogen and pop into a combined unit of helium.

The Sun Gods.
The brightest object to grace our skies is the Sun. Many cultures named their post powerful gods after the sun because of this prominence. These gods are known as solar deities. History has shown many cultures with interest in the sun, with nearly 40 solar deities spanning many different countries.