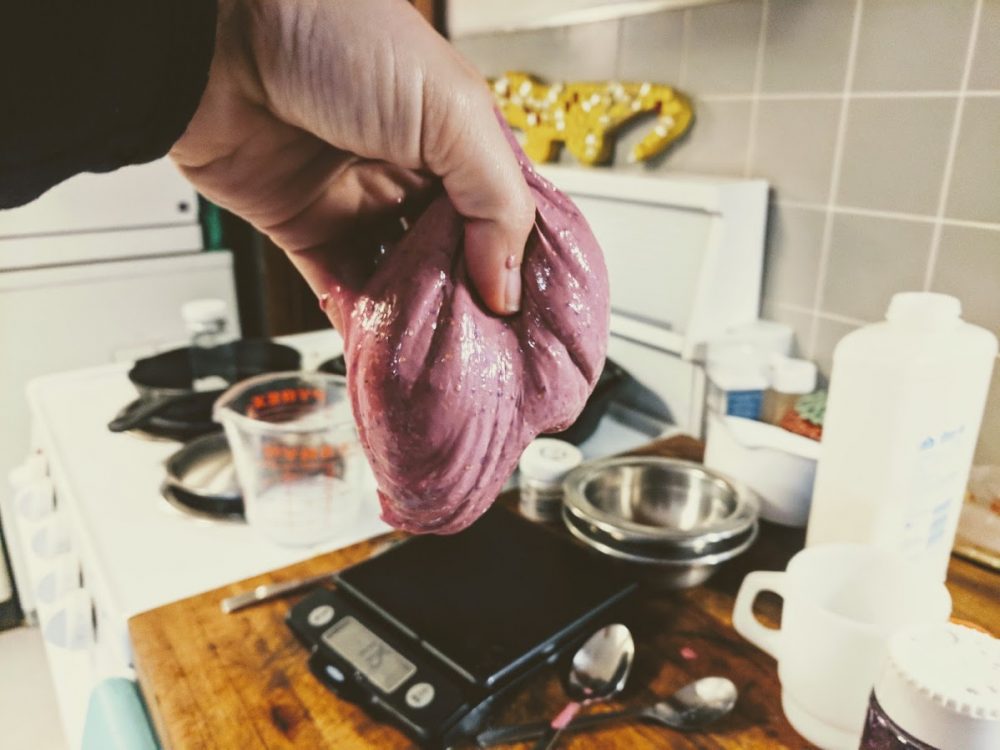 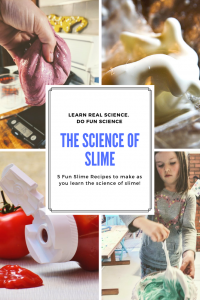 The science of slime.

We learned how to make slime with our slime recipe – but why is slime so fun to play with? And why are Borax and glue used in slime? Let’s research a little about the science of slime!

Why is glue in slime?

Glue is a common ingredient in many slimes. Why is glue important to slime? Glue is made up of long molecules, called polymers. Think of it as lots of long strands of hair.

In the liquid form, these polymers can easily slide past each other, just as long hairs can move around in the tub easily. How easily they can move, determines how easily your slime can move.

Where is the glue in milk slime?

If you made our milk slime recipe and you are reading this science of slime post you might be wondering how the milk slime is working. There’s no glue in it, right? Wrong! When you curdle the milk you are isolating the long polymers in the milk called casein.

This curdled milk can be used as a glue – seriously, try gluing two pieces of paper together with it. What happens when it dries? Learn more about casein glue here.

Where is the glue in Oobleck?

OK, you got us here, cornstarch and water don’t make a glue. In fact, Oobleck isn’t really a slime. It doesn’t hold together like the other slimes do. We included it because it is easy, fun, and also a non-newtonian fluid like all the other slimes!

Why is Borax in slime?

Not all slimes have Borax in them, but Borax plays an important role in many slimes. That is because, in water, Borax turns into borate ions that like to stick to the long glue polymers. Borax is the hairspray on our long strands of hair. It is the glue that ties our…glue…together into a slime!

When we are looking at the science of slime, this is the chemistry of slime.

In fact, even slimes that don’t have Borax persay, include ingredients that will ultimately lead to borat ions. For example, contact solution has boric acid in it.

Why is slime so fun to play with? Slime physics.

A slime is a non-Newtonian fluid.

That is a big fancy way of saying slime doesn’t follow the general rules we think of when it comes to how liquids behave. As we stretch the slime in our slime recipe it gets thinner, as in it starts to stretch faster and faster as your hands pull apart. The fact that it doesn’t have the same amount of stretch at any given time means that it is non-Newtonian.

What are other examples of non-Newtonian fluids? 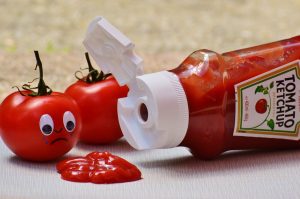 One you might be very familiar with is Ketchup. Yes, that popular condiment in your fridge is also a non-Newtonian fluid. That’s because the shear forces in ketchup cause it to liquify. That’s why ketchup is really hard to get started pouring, but once it starts moving turns into a liquid tsunami plowing over your fries. 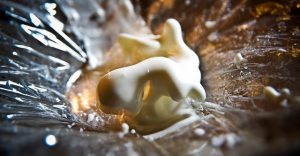 Another popular non-Newtonian fluid is Ooblek – a simple mix of cornstarch and water. When you tap the mix it will get hard in that area. That is, applied pressure will change how the fluid acts.

Water, on the other hand, is a Newtonian fluid.

When looking at the science of slime, this is the physics of slime!

Notice how the physics of slime and the chemistry of slime are different, but both explain parts of the science of slime! 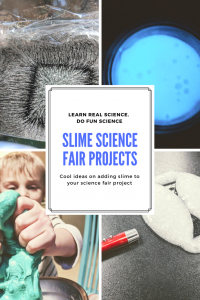 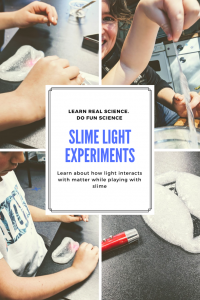 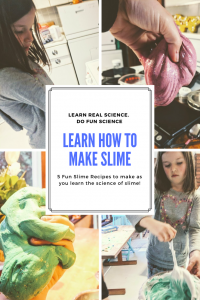 3 thoughts on “Science of Slime”