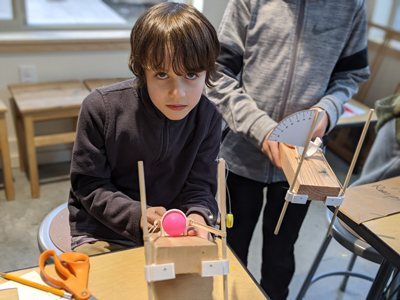 Learn about projectile motion, how the angle of launch affects distance, and how to create from plans in this fun DIY ping pong ball launching project.

Projectile motion, by definition, is a form of motion experienced by an object or particle your (a projectile) that is projected near the Earth’s surface and moves along a curved path under the action of gravity only. Thanks Wikipedia…

One of my favorite things to do is to tie everyday experiences, like projectile motion, to the science, like the range equation, without the math – because I cater to the K-4 crowd. I’m pretty sure if I put up a quadratic equation and tried to talk about what each peice represented my kids would be fast asleep in no time.

Learn how to apply real world experiences to physics

Everytime I introduce projectile motion my kids haven’t heard of it (keep in mind they are lower elementary aged kids so this isn’t surprising).

If I turn to the whiteboard and ask them if a ball can be thrown in the air in a staple shapped curve, however, they all know instantly that it can’t. They also know that when we throw a ball it doesn’t swoop up like an exponential curve, and it also doesnt go on a triangular path. In fact, they can all easily identify that the projectile goes along a parabolic curve.

Some students might mention that they can, however, throw a ball straight up and down, which is the perfect opener to talking about how the angle we launch at does indeed affect what the trajectory (which is a great word to expose kids to) will look like. Asking students to draw that scenario they usually draw a line up and down, or up, with a nice parabolic curve at the top, and then back down…which seals the deal in how projectiles travel.

In this project we learn a lot of skills. Kids will be building identical projectile motion machines, and logging in data to form a huge community graph. The graph will connect the angle of the projectile with the distance it goes. With enough data points we can use the graph in reverse. We can use it to find out what angle we need to fire at to hit a target 10 feet away.

So we have making, measuring, recording data, graphing, analyzing, and problem solving.

The best part of this project is that it is REALLY cheap – especially if you have accecss to a 3D printer and a contact at a local construction company to gift you free scrap 2x4s.

.STL file for printing the model (one full student project)

Even when you have a ruler and a pencil finding a center line can be difficult for kids. Even just drawing a straight line with a ruler can proove challenging for some kids.

I ended up having kids draw an X on their piece of wood using the ruler from corner to corner to find a singular center point. Many could line up the ruler fairly straight from that point. If they had trouble we measured two inches from the top on the left and right and drew a second X giving us two points to join together for the center line.

2. Hammer in your dowel holders first

I had a lot of students who attached the trigger holder first, which then makes it hard to attach the dowel holders as they go on the bottom, which means you are hammering a few inches in the air, or at an odd angle, or completely smashing your trigger holder.

The dowel holders should be hammered into the bottom of the 2×4 so the dowels will be held on the sides (instead of on the front). This helps support the weight of the 2×4. You only need two small nails for each holder, and the holes are pre-printed in the piece. You can add extra security by adding hot glue if you want, but I have not found this necessary.

The trigger holder is going to help insure that we all have the same force from the rubber bands being applied to our ping pong ball. In other words, it makes sure we don’t pull it back to different lengths, and fire the ball too early or too late. This really helps keep our data pool as accurate as possible!

Using the centerline you found in step 1 you are going to attach the trigger holder to the top of your 2×4 at the opposite end from the dowel holders (so they should be about 9 inches apart, with the dowl holders on the bottom and the trigger on the top.

Leave about a half centimeter of space between the end of your plant and the nail hole for the trigger holder and nail it along the centerline. Make sure it is facing forward! If your trigger is at an angle it won’t let you fire the ping pong ball!

4. Add a protractor to one of the tall legs.

Scientists make measurements all of the time. We are going to add a measurement tool to our ping pong ball launchers so we know what angle the ball is launched at. Afterall, if we launch our ball straight up (at 90 degrees) it won’t travel very far. The angle we launch at helps determine the range, or the distance our ping pong ball will travel – and that angle is something we are going to record to add into the community graph.

All you need to be able to measure the angle is a protractor, which you can print out, a piece of string, and a heavy bead.

Cut out the protractor you printed and glue the 0 degree line (near the 10 degree tick mark) along the top of one of your 1 foot long dowel rods. Then hot glue a piece of string with bead to the very top of the dowel (which should be where the protractor starts.

Voila! You are ready to measure angle! Notice how if you rotate your ping pong ball launcher the string indicates a different angle!

Putting your ping pong ball launcher together is pretty easy once you have all the pieces hammered in.

Put your dowels through the dowel holders to make your piece stand up. Then put a rubber band around each dowel holder (you will have to stretch it over the protractor as you put it on). You’re all ready!

Now you can launch and collect data, or use our data to help you know what angle you need to launch at to hit a target x feet away!

When scientists collect data they want to keep as many things as possible the same, which helps them isolate specific variables. In this project we are learning how angle affects the range (or distance) of a projectile. That means we need to keep everything else the same. Things like the type of rubber band, how hard we pull, and the height we launch from must all be identical to be able to use the data!

When collecting measurements, first set your launcher to a specific angle (in intervals of 10 degrees). Then launch the ping pong ball and measure how far (the range, or distance) it went in inches. You can log your data here, and see results of our combined data for this launcher here.

Can you figure out a way to make your ball launch 4 feet? How many inches is that? How can you use the graph to discover the best angle to try at first?

This is a fun and easy project to make with kids. Kids love launching things, and it is a great tie in with a game they may already have practice with.

Kids can learn about real life physics, and integrate math into this project seamlessly in a way that adds excitement rather than a way that bogs kids down. Older siblings who may have more math abilities can also use this as an opportunity to learn more about the kinematic equations and the projectile motions equations they will see in high school and college.

Don’t forget to leave ample time to shoot the angry birds paper box models off of something! There are so many ways to add new challenges once you have built this tool! 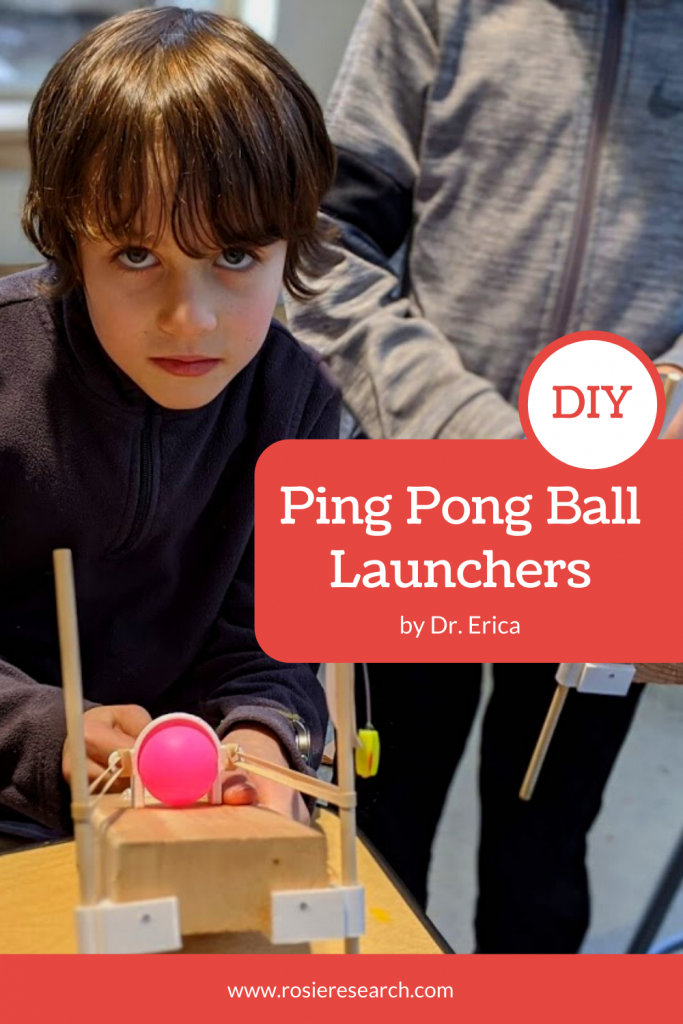