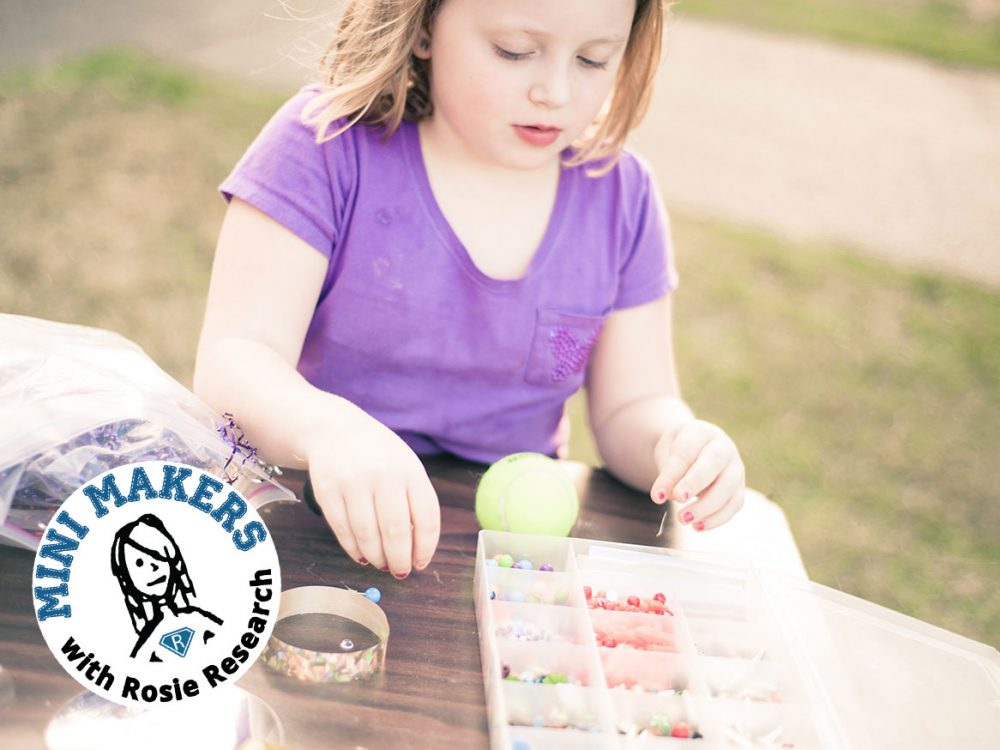 What comets are, and what they are made of.

Comets have two tails, however, only one tail is visible.

Make a mini comet to play and learn about space.

Our tennis ball comet STEM activity is a fun afternoon activity that leads to scientific discussions and opens up our creativity and artsy side. All you need is a tennis ball (or another ball that you can put push pins into) and decorations! I suggest at least two items as tails, since we will learn that comets have two tails, and lots of fun glitter and glitz - maybe even some eyeballs if you want your comet to bring life to wherever it lands!

Want to make a real looking comet to touch?

Check out our DIY Comet activity which will give you the recipe to make a comet!

As you are making your comets, save some time to let them take flight.

We did this at our local observatory, so I let the kids throw their comets off the roof, but anywhere is a ton of fun and adds a kinetic element to this mini-maker - studies show we learn better when multiple intelligences are engaged, and here we are working with art, science, small motor and large motor skills. In the activity, you will learn how to make a comet model (well really, how to make a 3D model of a comet), and have something to throw around the yard!

I also created a little comet application so your kids can discover the comet, and determine what type of comet it is, this adds a nice little writing element as well!

Two Tails: Yes, you read that right when I mention two items as a comet tail. That is because comets do, indeed, have two tails. One tail is called the gas tail made up of ions being blown by the solar wind invisible to our eyes, and the more iconic dust tail, created by small solid particles similar to smoke.

An icy heart: The center or nucleus of a comet is made of ice. The size of the nucleus varies with each comet, from very large, to obsolete in dead comets (see the About the Comet Application section below to learn what dead or spooky comets are).

A Loooooooooooong Tail: The gas tail of a comet (the one we can't see with our naked eyes) can stretch out for incredible distances - some have been shown to have tails 360 million miles long!

About the Comet Application

Comets have 3 essential properties that we identify them by. Their period, origination and specialties. What does each of those mean? Here are some quick cliff notes so you can sound like a pro!

Period: This is how long it takes for the comet to orbit. For example, the period of Earth is 365 days or 1 year. Some comets circle the Sun every few years, while others can take more than 200 years to swing by again!

On Earth, we see the effects of a comet that passes in our orbit every year, however. This is because as the comet zooms by on its own orbit it leaves tons of broken up little bits of dust and rock. As Earth passes through these little bits we see them as a meteor shower, and Earth passes through them every year because our orbital period is...one year!

Origination: This is where the comet comes from, or originates from. Many short-period comets (comets with periods less than 200 years) originate from the Kuiper belt. The Kuiper belt is a thick disc of asteroids that orbit between Neptune and Pluto. Well, technically, Pluto is considered to be an object in the Kuiper belt, one of the reasons it was downgraded to a dwarf planet (that's why it's not in our Solar System bracelets).

Longer period comets originate in the Oort Cloud (although the Oort cloud is still a theory that has never been seen!). Scientists hypothesize that the Oort cloud is a spherical body made of up icy chunks, as some of those chunks get knocked out of the cloud they begin to orbit the Sun as comets!

Specialties: There are some comets rarer than others. For example, a single-apparition comet is not bound in their orbit by our Sun. Instead, they go in and out of our Solar system as they create their own, very large, orbit.

Sungrazing comets pass into the outer regions of the Sun, a very toasty place for an object made mostly of ice. These comets can sometimes completely evaporate during a single orbit, while larger ones can survive a few orbits before disintegrating.

Dead or Spooky comets have no more gas - that means it has lost all of its ice and no longer has the characteristic gas tail that we all know and see.

Exocomets exist outside of our Solar system. Our Sun isn't the only star out there, and many stars have their own comets orbiting them. All of these comets, ones that don't orbit our Sun or even come into our Solar system, are considered exocomets!