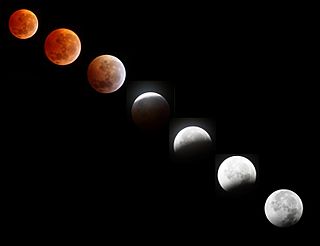 But January this year, in particular, has a plethora of moons. This month we will see a wolf moon, two supermoons, a blue moon, a lunar eclipse, and of course some full moons.

Basically, every cool lunar event is packed into January, so this is a fantastic month to study the lunar phases if you haven’t already done so this year. If you are looking for a fun intro activity into studying the moon I would suggest our cratered moons activity where kids get to learn how the moon got its craters with rocks and clay!

Are you wondering, what is a blue moon? Or what is a supermoon? And are lunar eclipses rare? Let’s find out!

What types of lunar events are there?

Every time you look into the night sky and view the moon you are viewing a lunar phase of the moon. A full moon is a lunar phase where the Moon is fully illuminated by the Sun as seen on Earth.

What makes a full moon? To see a full moon the Earth needs to be directly between the Sun and the Moon, allowing the Sun to fully illuminate the face of the moon.

A full moon happens regularly, about every 28 days or once a month.

So how can you see a full moon? The Sun, Earth, Moon system do not lie on the same plane. The moon has an elliptical orbit that is slightly tilted, meaning the moon is often higher or lower than the Earth. If it is on the same plane as Earth we get a new lunar phenomenon, a lunar eclipse, where there is no light that hits the moon.

A blue moon is a special full moon. As we mentioned earlier, a full moon occurs once every 28 days or so, or about once a month. Of course, since it isn’t exactly the length of a month (and since the days in a given month change from month to month) it is possible to have two full moons during a calendar month. When this happens we call it a blue moon.

The phrase “once in a blue moon” would make you think these blue moons are rare – however they actually happen fairly often, about one or two per year. 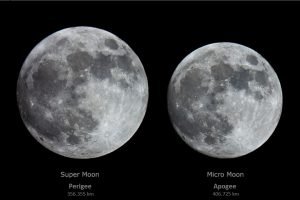 Just as the moon goes in and out of the Sun-Earth plane, it also gets closer and farther from the Earth. This is because the moon’s orbit is not a perfect circle but instead looks like a squashed circle or an ellipse.

When a full moon is also at the perigee of its orbit or is at the closest to Earth in its orbit, we call it a supermoon.

How much closer is a supermoon? The supermoon is about 15,000 miles closer to Earth than a regular full moon.

4. What is a lunar eclipse? 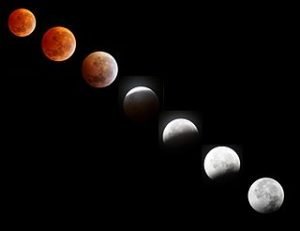 A lunar eclipse only happens during a full moon, and it is when the Earth’s shadow blocks the sunlight that usually illuminates the moon.

Why isn’t there a lunar eclipse every full moon? The moon’s orbit around Earth isn’t in the same plane as the Earth orbits the Sun. That means that for most full moons the moon is passing above or below the shadow that Earth casts. Since it is not in the shadow the sunlight is able to hit the full moon and illuminate it. It is only when the Sun-Earth-Moon system is in the right orientation and the moon is in the right “height” in its orbit does a lunar eclipse happen.

Lunar eclipses happen about twice a year when the moon is at one of its two nodes of orbit.

7. What are the named full moons? 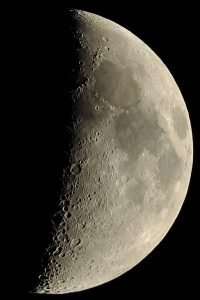 Named full moons are not scientifically different from a regular full moon. However, the names of these moons helped Native Americans track the seasons.

The first full moon of each month has a special name that dates back to their traditions. What names are given to full moons?

January is called the Wolf Moon. This is named after the howling wolves would often make around villages in January.

February is called the Snow Moon. This is likely because February is often the snowiest of months.

March is called the Worm Moon. This is because as winter began to turn into spring and the ground began to thaw, earthworms would begin to be seen once again.

April is called the Pink Moon. This moon is named after the early spring wildflowers that were often pink – herb moss pink and wild ground phlox.

May is known as the Flower Moon. The May full moon comes at a time when spring is blossoming and flowers are in bloom all around.

June is known as the Strawberry Moon. As spring turns into summer strawberries become abundant during this month of the year.

July is known as the Buck Moon. It is during this time of the year that bucks begin to grow their antlers.

August is known as the Sturgeon Moon because fishing tribes would catch plenty of Sturgeon during this time.

September is known as the Fruit Moon, and also often contains the Harvest moon. The Harvest Moon is the full moon closest to the autumn equinox, and thus often falls during the month of September, but can also be found during October as well. The Harvest Moon signals to Native Americans, and farmers, to harvest their crops (often corn).

The Fruit Moon is named such as the fruit trees are beginning to bear their fruits during the month of September.

October is the Hunter’s Moon (and also sometimes has the harvest moon). During this full moon, hunters can easily travel through their fields and spot animals.

November is the beaver moon. This is because during November beavers are getting themselves ready for winter, allowing easy catching of beavers for pelts, fur, and food by the Native Americans.

December is called the Cold Moon, likely because December is cold. Some tribes have named the December moon the Long Night Moon since during this time of year the nights are longer.