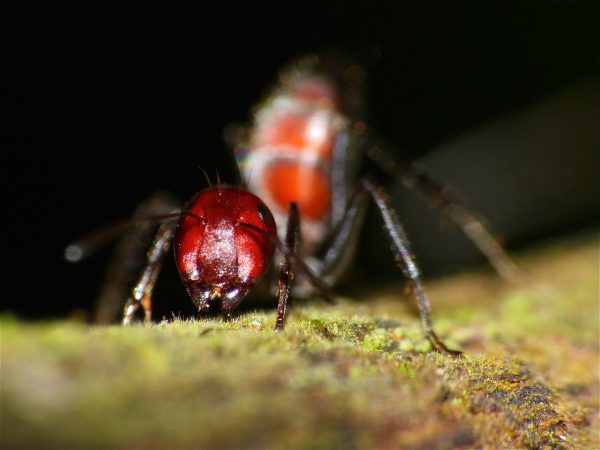 Can you imagine protecting your family by ripping open your abdomen and spewing toxic goo on an intruder? Me neither. I feel like dialing 9-1-1 or forging a pair of scissors is more reasonable.

For some ants, however, suicide goo-ing is the weapon of choice to protect the nest.

A team of scientists recently discovered a new species of exploding ants in Southeast Asia. One of the scientists on the team, Alice Laciny, a PhD student at the Natural History Museum of Vienna, recently sat down with me to talk about her love of science, and what it’s like to classify a new species.

Lured into a love of Latin naming and human anatomy by her mother, a doctor, Alice spent her childhood investigating the animals that filled her grandparent’s yard.

Mingling with the beetles and wild boar she cultivated her love of science. Her grandparent’s house was her first encounter with ants too. While her grandma wanted to get rid of a growing ant nest, Alice instead brought them little nibbles of bread and meat, lying on the floor for hours on end watching the ants busily do their work.

Watching the lines of them bring food or building supplies into the nest her interest in insects, and ants blossomed.

After getting her Master’s Alice was afloat in the world when a lucky strike hit – there was a job opening at the Natural History Museum in Vienna for an assistant on a project that was investigating exploding ants.

Alice signed up at once and hasn’t looked back since. The job was so captivating that Alice is now working towards her Ph.D. with the data and work she has completed thus far.

The toughest part of her work doesn’t have to do with ants, however.

That comes with breaking down barriers and navigating the obstacles that are in her path from being a female in a traditionally male field. And while her work is not always taken as seriously as she would like, and her future often seems a bit uncertain, it is her passion that keeps her going.

That and the beauty of working at the Natural History Museum amidst the old wooden furniture steeped in hundreds of years of tradition and surrounded by some of the worlds most intriguing insect collections. Not to mention the ants themselves.

Alice sees past the pest that so many of us want to rid our house of.

She thrives looking through the microscope as she investigates all of the tiny structural details that could lead to the classification of an entirely new species.

Alpha taxonomy, which is the description and classification of a species, provides the backbone for all future research involving the animal kingdom.

It is what helps scientists determine exactly what plant, animal, fungus, bird, or insect they are investigating – allowing them to compare and contrast their behavioral findings with previous experiments.

What does one look at when classifying a new species?

It certainly isn’t the same for all types of living creatures, but we asked Alice what her team has done for the ants they discovered and found out that first researchers do behavioral observations in the field.

What is their explosion behavior? Activity? Food preferences?

What trees do these ants nest in, and what do those nests look like? What kind of bacteria or fungi live inside the nests, or on leaves nearby?

It seems like a lot to record, but that is just one part of the process.

The other part takes place in labs with ant specimens that were either frozen or stored in alcohol.

These specimens are then studied under microscopes, in DNA sequencing machines, and measured in such an intense fashion it will make your mind spin.

Alice measures up to 30 body parts per ant. Using an aggregate they can find the ant’s proportions and details of the morphology which allows them to discern the different castes within a species, and the different species in general.

Because the team discovered a new species they had even more work to do – like creating a holotype of the species for another researcher to access and publishing the work in a scientific journal.

All of the discovering, exploring, researching, and classifying still has scientists scratching their heads about one important thing when it comes to exploding ants – why?

There isn’t currently a definitive answer as to why some ants will sacrifice themselves to explode goo on intruders.

Why exploding goo? How is that adaptation helpful?

It seems we will all have to wait to find out the answers to those questions.

In the meantime, Alice and her team are working hard to finish their classification in the next year, when funding runs out.