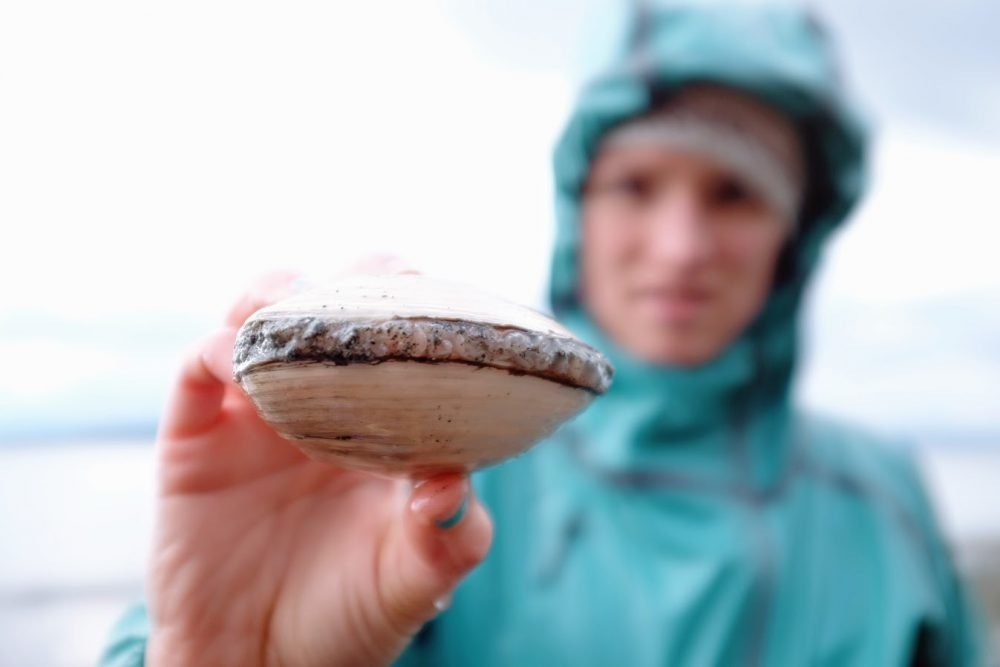 What can you learn from a dissection project? Dissection teaches us about anatomy, that is, how various parts of the body work together. The clam is almost like a big muscle attached to a stomach, which makes this a fun dissection project with just the right amount of ick to keep kids interested, but not enough to turn them away.

How to dissect a clam – an overview.

Scroll down for instructions on each step – note this is a dissection activity for young learners and is not meant to be a tutorial for high school or college level classes. We will introduce vocabulary, but the main goal of this is for kids to have fun and investigate the anatomy of a clam.

1. Open the clam by cutting the adductor muscles on both the top and bottom shells

When you have your clam in hand notice how the two shells (also known as valves) are shut. In fact, let your kids try to open the clam with their hands. Ask them, why do you think clams want to stay shut?

To open your clam you will need to run a knife along the shell on both sides of the hinge. This will cut the muscles holding the clam together. Do this on the top and bottom shell.

2. Open the shell and remove the clam, save the shells to look at later

Once you have cut the adductor muscles the clamshell will, quite literally, pop open. This will reveal the soft parts of the clam to investigate further. Save the shells to look at later.

3. Look at and investigate the siphon, mantle, foot, gills, and the pouch of internal organ

When your clam is open you can see a lot of interesting parts of the clam anatomy immediately.

The siphon is the long neck that sticks out of the clam and squirts the water at you as you dig it up. It often has a dark brown or black tip to it, feels tough and has ringlike ridges going around it. Once you have located the siphon you can cut it off and investigate it more closely. The siphon is very much like a muscle with two long hollow tubes in it. One of these tubes sucks in water (the inhalant) and one expells water (the exhalant). You can use a pair of scissors to cut up the tubes and look at the insides of the siphon.

The mantle is a thin membrane that runs along the inside of the shell and culminates in what I like to call the clam’s lips. This is a long thin strand of muscle that is often wavy and the part of the clam that you can see when the shell is slightly open. This is known as the dorsal body, and it is like a robe that covers the internal organs of the clam. Over time, the mantle secretes what will become the shell, allowing the animal to grow a larger home.

In your clam there is a large pouch that might look like a stomach, filled with green and brown mush. This pouch indeed contains the stomach, but it also contains the other internal organs. It is pretty hard to miss this pouch, in a medium-sized clam it will be about the size of a large marble. Along one end of this pouch is a smooth thick piece of muscle. This is called the foot of the clam. This muscular foot allows the clam to dig itself into the sediment. Fast diggers, like razor clams, have a much larger foot than slow movers, like butter clams. In fact, this can be a fun side dissection and comparison if you have access to both types of clams.

The gills of the clam can be found around the large internal pouch we described above. The gills are thin, a medium brown color (not pink like the muscular portions of the clam), and striated (or looks “stripey”). The gills help the clam breathe. Clams bring in, and expel, water through the inhalant and exhalant siphons (remember those two straw like tubes we found earlier?). The thin gills have millions of cilia on them, tiny hairlike structures, that allow it to move the water around and exchange gasses. Some gills also trap and strain tiny pieces of food for the clam.

The visceral mass is what I like to call the pouch – it’s the big marble sized ball we mentioned earlier. This mass has things like the gonad (sexual reproduction), intestines, stomach, and digestive glands. If you cut into the visceral mass you can find a system of tubes, which is the intestines, and a soft whiteish flesh that is the gonad tissue.

The heart of a clam is very different from the heart of a human. A human has a closed system heart – all of the fluids our heart pumps is basically stuck in an intricate system of pipes. The heart is the pump that moves the fluid through these pipes. A clam has an open system of circulation. Instead of the fluids being stuck in pipes the fluids are all over, and the heart pumps this open fluid around (similar to a jacuzzi bathtub where the fluid is in a big tub instead of in pipes.

We can learn a lot about a clam from looking at its shell. For example, the striations, or stripes, in the shell are growth rings. This can help us determine the age of a clam.

If you look at the dorsal of both shells you will see what look like little miniature tooth like segments that project out. These are on both shells and actually interlock when the shell is closed – try it and see!

You can also take a look at where the adductor muscles were connected to the shells on both sides since there will be a little muscle tissue left behind from when you cut it open.

Take a look at the inside and the outside of the shell, do you notice any differences? Why would it be good to have one rough surface and one smooth surface? If you crack the shell just right you will be able to see that the shell consists of three layers, the outside bumpy layer, a middle opalescent layer, and an internal smooth layer.

The seashore to plate challenge.

Deepen your learning about clams and extend it from just clam anatomy to the clams role in our ecosystem and food chain by partaking in our seashore to plate challenge.

This challenge helps kids see where our food comes from. Kids living near a coast or area with clams can dig up clams. They will then need to wash and ‘gut’ them, a similar process to the dissection which helps kids see that we often eat the meat, or muscle, of an animal.

Then the project goes into the kitchen where kids will bake up a delicious fried clam recipe. This is a great way to begin or end a unit on clam anatomy and clam dissection if you want to give your kids a larger view of clams in general!

Check out our fried clam recipe

1 thought on “Clam Dissection: A first introduction to anatomy”