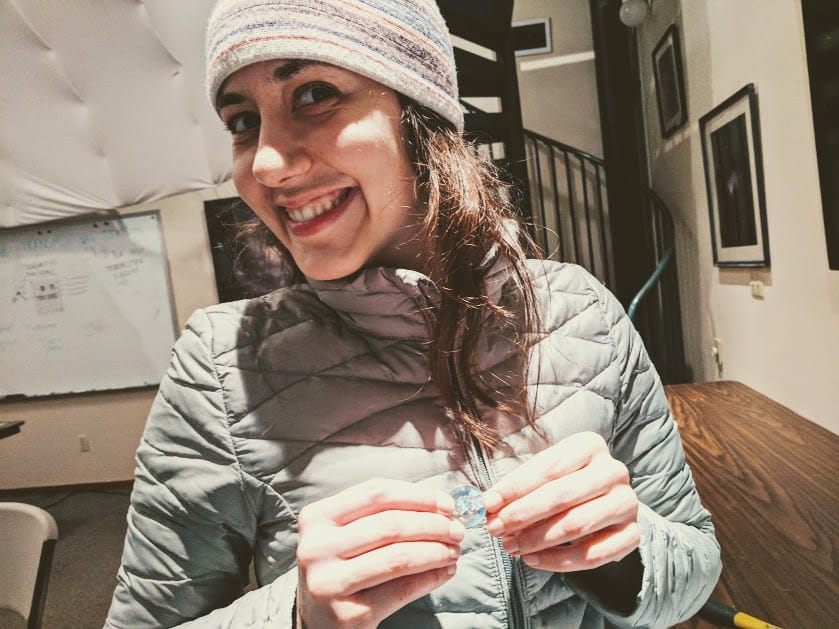 How to write your name in binary, ascii, format.
Computers can only store information in a series of 0s and 1s.

Using only two digits, 0 and 1, we can write entire novels.

Writing in binary is unlike writing in any other language.

Everytime you save the letter "a" in an essay on the computer, your computer has to figure out a way to translate the "a" into a language that it can speak. Computers have only two letters in their language, 0s and 1s, also known as binary.

To write the letter "a", your computer uses 8 bits, or one byte, to write 0110 0001. When another computer reads 0110 0001 it knows to display the letter "a". All computers have the same binary code for each letter, which is translated through ASCII code tables, one reason why ASCII is important, and integrated with, binary.

In this fun science activity, you will have a chance to stamp your initials in binary, while having a first glance at ASCII tables, which define how to go from 0s and 1s to letters and numbers.

Project Ingredients:
Steel plate (This is important, metal stamping on wood will not work!)
Metal medallions
Metal stamps (specifically 0 and 1, but you can also get the alphabet)
Hammer

LEARNING ABOUT ASCII AND WRITING IN BINARY

Digital Babbelfish.
Before a standard set of bytes was created to represent "a", "b", "c", and so on, computers couldn't talk to each other. A Mac couldn't talk to a PC. To make matters worse, back then there were a whole bunch of manufacturers; Atari, Bell, CompuAdd, AST, Compaq, Dell, Gateway, etc. Imagine if you typing up a report on one computer, but not being able to read it on another? As each manufacturer created their own proprietary software, they also created their own proprietary manner to code our alphabet (and everything else). A lot of pulled out hair happened as consumers couldn't read documents between computers.

What does ASCII stand for?
ASCII, the American Standard Code for Information Interchange, fixed all of that. As computer manufacturers started using ASCII, data files gained the ability to be read on all computer types.

Are ASCII and binary the same?
No. ASCII uses a set of binary codes to store information in computers. Binary has only two options, 0 and 1. ASCII uses 8 bits of data (one byte) as a reference table for values. Think of Binary as letters and ASCII as a language translator.

How do you say ASCII?
ASCII is pronounced ASS-kee (like you are going to ask "e")

3 thoughts on “Writing in Binary”