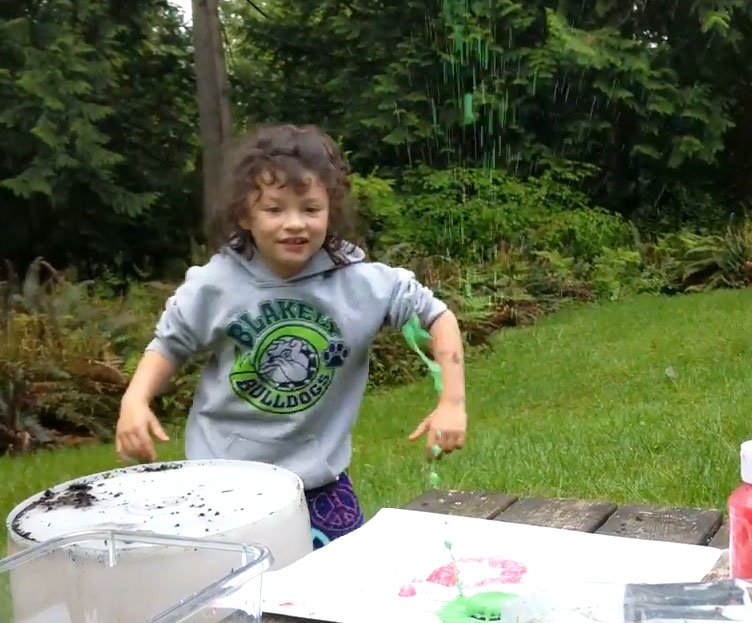 Gas expands, and can create a large force, large enough to blast off.

Rockets have played a large role in our knowledge of our solar system, and the universe beyond. We use rockets to launch astronauts to the moon, land rovers on Mars, orbit probes around planets, and launch telescopes into space. Rockets often use the pressure created by heat to blast off. In this activity, we will use the pressure created by a chemical reaction to blast off and create masterpieces.

Using common household items we will take a whole new spin on painting, creating one of a kind, jaw-dropping, and fun art. In addition, you can talk about the science of rockets during this activity (see below for some talking points), investigate the best rocket fuel, and think about why our rockets pop in the first place!

Why rockets, and not planes, for space travel? Rockets and airplanes fly by different means. Airplanes rely on air to push against. Not only are they pushed forward by the use of fans and turbines, but their wings also rely on differences in air pressure generated by the wing shape. The air on top of the wing has to go faster than the air on the bottom, making the bottom air have more air pressure, keeping the plane afloat.

Why space travel?
Rockets have opened up our universe. Without rockets, we would not have walked on the moon, visited our planets, driven on Mars, or seen Hubble's iconic deep space image. We would not have astronauts on the International Space Station because there would be no space station. We wouldn't even have satellites to help us navigate with GPS! Without rockets, we would be bound only to the Earth.