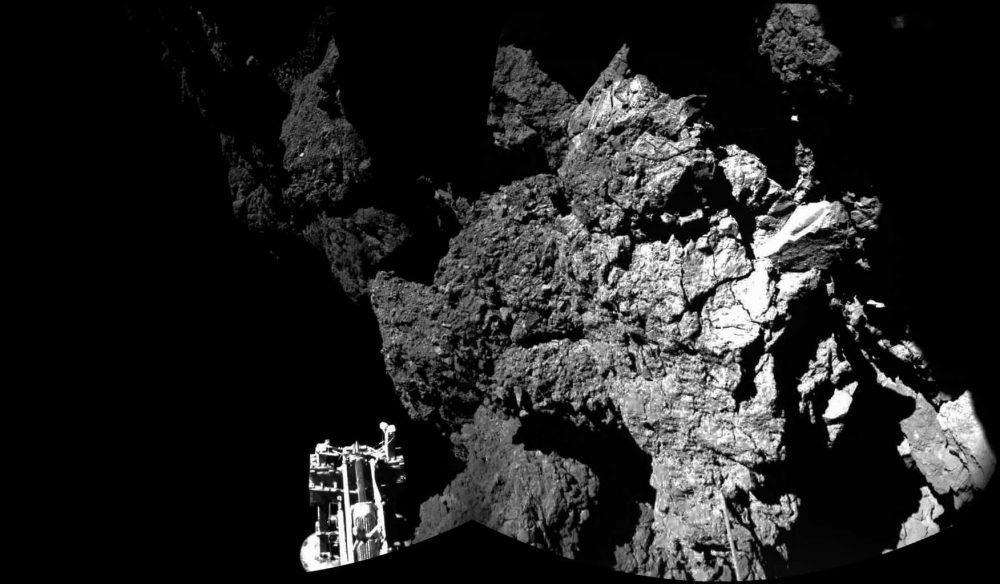 After a 10 year voyage Philae landed on Comet 67P – Rosetta’s Stone. Landing on the comet was a feat in and of itself. Armed with harpoons and a broken cold gas thruster it was given the go ahead to land November 12, 2014. The Philae landing didn’t go as planned though. Instead of touching down, Philae bounced. Twice. It ended up in the shade, bad news for a solar powered science lab. Scientists were able to twist Philae just enough despite the lack of the harpoons firing. Then they had to wait and hope while the comet cruised closer to the sun, charging Philae’s batteries.

While not ideal, it turns out we learned a lot from the bouncy landing. For example, on the first bounce Philae sunk in almost a foot, but at its final resting place there is only 3cm of dust on top of an incredibly hard icy surface. The two hours and multiple touch down journey allowed scientists to piece together layering and surface strength changes on the comet.

The latest and greatest data just came in. Philae finds organic molecules. Sixteen of them to be exact. What makes an organic molecule? Life, as we know it, all has carbon. Carbon is unique in that it can create four covalent bonds with other molecules. This allows it to make long and short chains of molecules, called polymers. In this way, carbon is the backbone of life, and carbon containing molecules are considered organic molecules.

An instrument suite on Philae recently found 16 different types of carbon based organic molecules. Four of them are raising quite a stir. Methyl isocyanate, acetone, propionaldehyde, and acetamide. Why? Because we have never seen them on a comet before.

Philae finds organic molecules. So what?

Origins of life. That’s what. These organic compounds have never before been seen on a comet. The fact that they are, however, means there is a chance that some could fall off onto a planet. Under perfect conditions that could help life as we know it form. These findings will have a major impact for researchers who study the origins and formations of life.