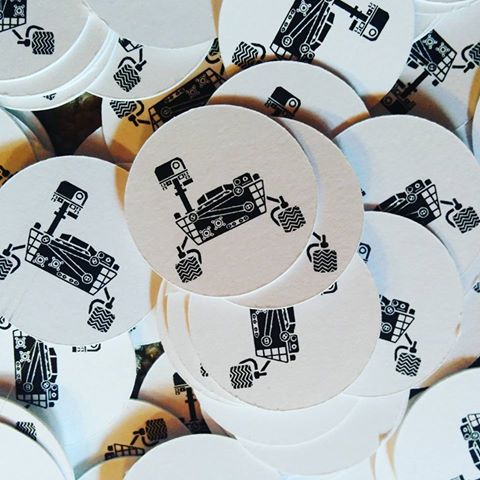 How to give basic directions to a rover to program it through a day.

When programming you have to consider the reference frame of the rover to decide on directions.

Some of the most magical images we have of far off places come from our crew of rovers driving around Mars. The paths these rovers take is painstakingly looked over. Every detail is considered and every turn thought about. In this fun activity that helps kids learn programming, we will drive a rover into Victoria's Crater! Kid's will program all of the moves for one day, just as real rover drivers do. This is a fun STEM activity that lets kids be in charge, telling the parents what to do, as they learn programming. What if the program doesn't work? That's OK, just change a few lines and see how it goes!

We ran this with our local astronomy club and paired it with SmartLabs Recon 6.0 rovers. It worked out perfectly since command lines in the paper rovers look identical to the SmartLabs rovers! Want more programming practice? We have a much longer course that goes up and down Olympus Mons in our Mission to Mars lab!

LEARNING ABOUT ROVERS AS YOU LEARN PROGRAMMING

How fast can a Mars rover travel? Top distance for rover travel in a day on Mars is a non-jaw dropping, unimpressive 100m. Of course, the rover often stops here and there to sample rocks, take photos or perform other experiments, shortening that distance drastically. Curiosity usually travels at a slow 0.9 miles per hour.

How long have our rovers been active on Mars? Spirit and Opportunity were engineered to last a max of 90 days on Mars. Spirit endured a whopping 5+ years on the red planet before getting stuck in soft soil. Of course, that wasn't the end for Spirit. She became a stationary spot for experiments and kept on chugging away for another year! Opportunity, on the other hand, is still functional! It has clocked almost 30 miles on Mars and continues to give us interesting data and beautiful images! These rovers are truly reaping huge rewards on our investments and far outliving their initial lifespans!

Does Curiosity have lasers? Yes! Curiosity has a laser that can vaporize rocks up to 30 feet away. This laser allows equipment in the scientific suite to analyze the composition of vaporized bits. The rover planned for the Mars 2020 mission plans to double the lasers onboard to not only vaporize but also to detect the makeup of those rocks better.

Is there water on Mars? Mars scientists are always looking for water, a key element to life as we know it. We know that there is water locked into ice at the poles of Mars, but ice doesn't create life, liquid water does. New evidence shows that not only did Mars have flowing water at one point, there is still flowing water on Mars, although it is intermittent. To look for water trapped deep in the ground Curiosity has another cool beam it can shoot, a beam of neutrons. The speed that the neutrons bounce back from the ground can give Curiosity information about the abundance of hydrogen, which gives us information about the abundance of water!