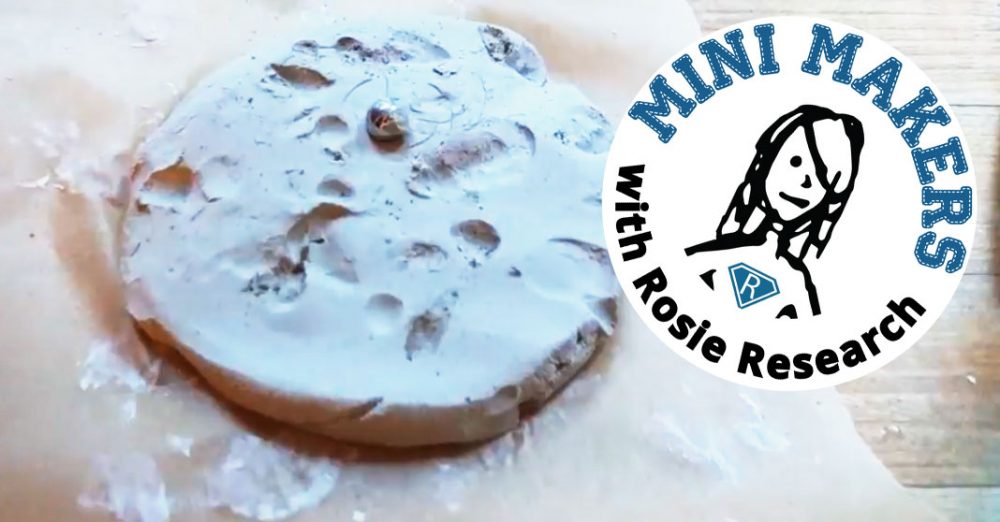 The moon has so many craters because of all the meteorites that hit its surface.

Let's investigate our Moon! Look at any image of the Moon and one thing will pop out - an immense amount of craters. There are so many craters, that there are even craters within craters...within craters. What makes the craters on the moon? Meteors! Space is filled with tons and tons of rocky chunks whizzing around at dizzying speeds, and when the Moon blocks a path, BOOM! A crater is formed. The moon gets about 75 new craters a year based on current LRO estimates! In this mini maker activity we will use air dry clay for our moon, and rocks of different sizes as our meteorites!

Why does Earth have relatively few craters despite it being so close to the moon?

Between the orbits of Mars and Jupiter lies a belt of asteroids, the Ceres asteroid belt. As all these rocks of different shapes and sizes orbit at different speeds they can crash into each other - spreading debris outside of the asteroid belt. In fact, it is believed that one such collision 65 million years ago created the massive meteorite that crashed into Earth wiping out the dinosaurs!

With all of the collisions, our solar system is bombarded with whizzing meteors, some of which crash into our moons surface creating the landscape we see today.

So why don't we see a similar landscape on Earth? Can you or your kids think of a major difference between Earth and the Moon that might explain this difference?

Here are a few ideas to get you started:

Could it be the size? The size of Earth is larger then the size of our Moon, so if it were just based on size we would have to imagine that Earth would have more crater impacts than the moon, not less.

Could it be it's location? Space is huge. In the grand scheme of things there is practically no difference between our location and our Moon's location. So this could not explain why there are more impacts on the Moon than on Earth.

Could gravity pull meteors onto the Moon more than on Earth?The strength of gravity depends on th size of a planet, moon or star. Earth is larger and thus gravity pulls down harder on us. This is why space walkers could bounce around easily on the moon and seemingly float!

What could it be? Take a few minutes with your kids to brainstorm other ideas, then take a look below to find out why!

Our atmosphere! Earth has an atmosphere, a protective blanket made up of various gasses. When objects enter Earth's atmosphere they rub up against all of these gasses and get very warm. In fact, they get so warm that they will begin to burn up and slow down at the same time. Our atmosphere protects us so well that a 15 ton meteor travelling at 150,000 miles per hour will slow down to a near stop before gravity pulling the rest of the small body to the ground, having an impact at only 350 miles per hour. In fact, our atmosphere will completely burn up meteors that are less than 7,000lbs, making them just shooting stars in our night sky!

LEARNING ABOUT OUR CRATERED MOON

The Dark Side: The dark side of our moon has never been seen from Earth, that is because the moon rotates at the same rate as Earth, thus always showing the same face.

Two Moons in one: Did you have to look at that dark side of the moon fact again? 30 miles thicker on the back side than on the front...but why?!??!? Scientists believe that in the beginning Earth actually had two moons, one slightly smaller than the other. The smaller moon travels slightly faster in orbit, and over time had an incredibly slow motion impact with the larger one, creating the moon we see today. Basically, the back side of our Moon has a second moon protecting it!

Mother Thea: Thea is the mother of the Moon goddess, and the name scientists have given to what they believe is a massive asteroid that hit Earth during formation. This impact not only gave us our tilt (which is what gives us seasons), but also spewed out tons of debris which then formed the two moons, which then created our one Moon!