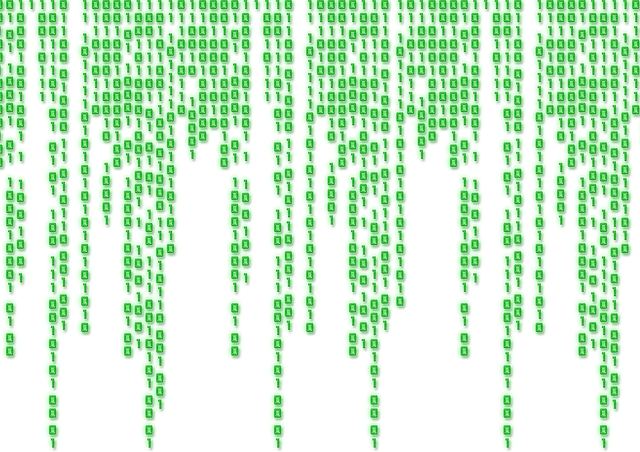 In an age where smaller and smaller computers are everywhere data storage is at a premium.

We write and read our data to hard drives in 0’s and 1’s. Of course, they aren’t really little tiny 0’s and 1’s inside the hard drive. Typically we have a sheet of magnetic material that is cut up into billions if tiny spaces. When we want to store data we either magnetize a tiny area (give it a 1) or we leave it unmagnetized (give it a 0).

To write or read the data we have to wait for the magnetizing arm to move back and forth, as well as the time it takes for the electronic signal to reach other parts of the computer. 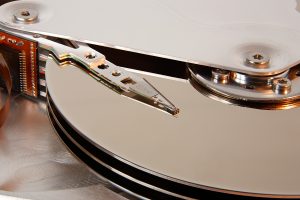 No matter how fast we are able to process information, we still have to load information from our memory chip. That means building higher density hard drives doesn’t speed up our memory retrieval, it just increases what we can remember. Welcome to the von Neumann bottleneck.

He hypothesized that as we process information faster they will have more time sitting around waiting for the data to be retrieved. We can only compute as fast as we can run back and forth to the magnetic disk to find out if there is a 0 or a 1 in the next slot.

A cool science experiment for your next rainy day is to take apart a computer hard drive. You can often find broken hard drives cheaply at a thrift store. The only other things you need for this kids science experiment is a small screw driver and your imagination. Can you figure out what pieces have which jobs?

Some of the fastest memory retrieval systems can reach 100-200 MB/s. Using light could speed that up significantly, but only if we use light exclusively. If we have to convert our data into electronic signals at each end (but use light in the middle) we are in the same boat as before. We will be in the von Neumann bottleneck.

To make a completely optical memory chip we need a material that has two states. A 0 state and a 1 state, just like we had magnetized and unmagnetized.

Researchers just created a light based memory chip that uses Ge2Sb2Te5, let’s call is GST – but you will know it better as the shiny stuff on CDs and DVDs. GST has two states, which happens to be just what we need! It can be either crystalline, like metal, or amorphous, like glass. We can control the state of GST with pulses of light.

A team at the University of Oxford have done just that in a paper published by Nature Photonics.

How do light based memory chips work?

To retrieve the data a very low intensity pulse of light is sent through. The states of the GST will affect how the light is absorbed and transmitted. The team was able to measure these differences to determine what state the GST was in, reading off information as 0’s and 1’s! 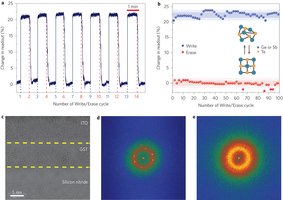 Reading and writing to light based memory chips.

The team even found that we can write and read at the same time by using two different wavelengths – one to write and one to read. This would give virtually unlimited bandwidth. The team thinks they will be able to read 1GB/s. That’s 1000MB/s, which far beats the 100-200MB/s chips that are out there now! 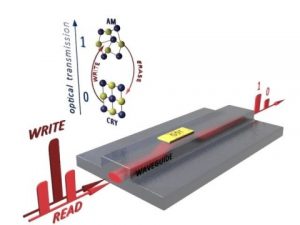