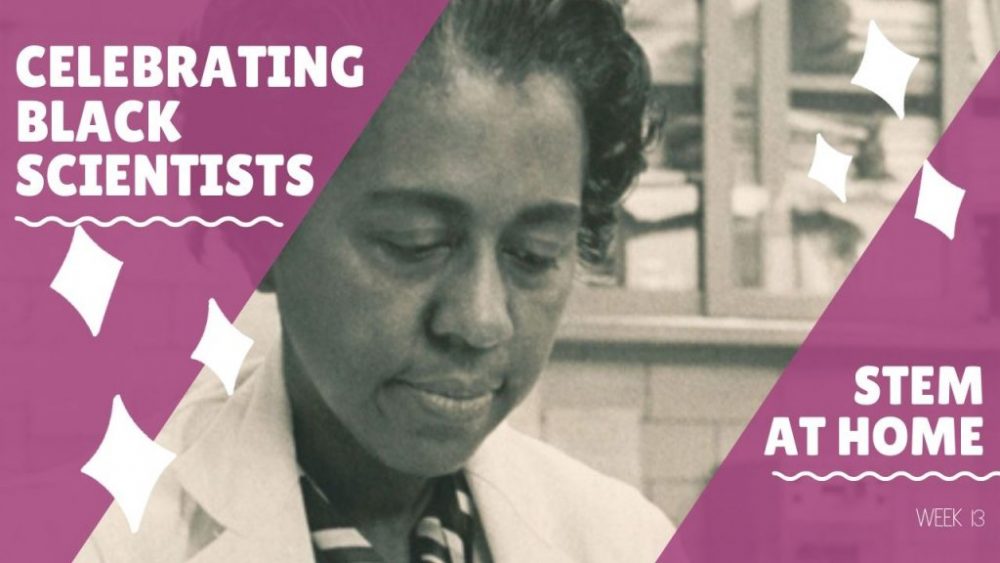 This is a fun set of paper circuit activities to celebrate some amazing black scientists. Without men and women of all backgrounds, our science would be far less rich.

Here is the supply list you will need for this week’s activities: Paper circuit supplies on Amazon

Born into slavery, George Washington Carver saved the farmers of the South through crop rotation and invented hundreds of different uses for the peanut and sweet potato.

George Washington Carver was born into slavery on the Carver plantation. After being denied entry to a Kansas university due to the color of his skin he received a Bachelor’s degree in agricultural science from Iowa State Agricultural College.

This was important work because Southern plantations had grown cotton for decades upon decades prior. By replanting the same crop over and over again farmers had taken all of the nutrients out of the soil, and it became difficult, and sometimes impossible to grow.

He realized that by rotating crops, or changing what crops are planted each year, you could keep the soil healthy and ready to grow more food in the future.

However, peanuts did not have a market that farmer’s could sell to. Trying to increase demand for peanuts he created over 300 products from peanuts including milk, soap, ink, dyes, and more.

The first Black woman in space spent nearly 80 days orbiting the Earth, but not before Mae Jemison spent years as a doctor in the Peace Corps working in Sierra Leonne and Liberia.

Mae Jemison excelled in all areas of her life. She worked so hard in her studies that she started high school when she was just 12 years old, starting her journey at Stanford University at 16

Jemison graduated from Stanford University with multiple degrees, then went to Cornell University to become a doctor. At this time she had considered trying to be an astronaut for NASA, but had not applied for a position.

She used her medical training in the Peace Corps in Sierra Leone and Liberia. During her time with the Peace Corps she supervised the pharmacy, laboratory, and medical staff, as well as providing medical care and researching various vaccines.

After her time in the Pace Corps she finally applied to NASA to become an astronaut.

During her time with NASA she became the first Black woman in space and orbited the Earth for 80 days before leaving to help with the 100 Year Starship project.

The grand daughter of a freed slave, Jewel Plummer Cobb discovered the relationship between melanin and skin damage from the sun, and even created a cancer treatment still used today, nearly 75 years later.

Jewel Plummer Cobb was the granddaughter of freed slave who later became a pharmacist. Her father became a physician of dermatology giving her a head start to a life of science and medicine. She ultimately combined these tools to study treatments for melanoma, a dangerous and sometimes deadly cancer.

Cpbb studied how melanin and skin damage are related. Melanin determines the color of a persons skin, the more melanin a person has, the darker their skin is. She discovered a drug that is still used today to treat certain types of skin cancer, lung cancer, and childhood leukemia.

She was a vocal advocate for bringing more women into science and worked to increase minority representation in her workplace. She did this by securing funds for building educational complexes, and mentoring middle and high school students from disadvantaged backgrounds.

Her work to uplift and support disadvantaged students became her legacy.

Known as the Father of Bioluminesence, Emmett Chappelle not only discovered how some animals produce light without heat, he also discovered how algae turn CO2 into Oxygen, a critical piece to the puzzle for NASA sending astronauts on long term missions.

Emmett Chappelle was raised in a segregated Arizona, attending the Phoenix Union Colored High School before enlisting the army to serve during WWII where he was wounded not once, but twice.

After the war he continued his education, attaining his Master’s degree and joining a Research Institute in Baltimore. It was there that he discovered single celled organisms, like algae, convert carbon dioxide to oxygen through photosynthesis.

This discovery was incredibly important to our space explorations, because it meant that humans could breath in oxygen and breath out carbon dioxide, and the algae could breathe in carbon dioxide and exhale oxygen, creating a life sustaining loop and opening the door to thinking about exploring long space flights and planetary missions.

He also discovered bioluminesence, light given off by bacteria without heat. Bioluminescence can be seen in oceanic animals like jellyfish. But even some algae are bioluminescent, lighting up the ocean. You can sometimes see this by throwing rocks into the water on dark nights.

He was also an exobiologist and astrochemist for NASA, developing the tools to help scrape soil from Mars.

Ever heard the advice that you should eat healthier to help your heart? You can thank Marie Maynard Daly. She discovered many links between our diets and the health of our hearts and blood vessels as well as contributed to the Nobel Prize winning work of DNA.

Marie Maynard Daly broke down barriers of segregation and sexism when she became the first Black female to earn a PhD in Chemistry from Columbia University.

Her work has revolutionized the way we look at how our diets and hearts dance together. It is likely that you know someone who has been advised by their doctor to change their diet to help their heart.

She investigated the impact of sugar and cholesterol on heart health and discovered that our blood pressure could give us a view into the health of our arteries – the conduits that carry blood around our bodies. She also learned of a link between eating foods with high cholesterol and our arteries being clogged by fatty plaque.

But she didn’t just focus on the dietary impacts on our heart health. She also looked at proteins found in the command center of a cell, the nucleus. Her work was so trans formative it is now considered fundamental to the field, and her research were used by Watson and Crick in their Nobel Prize winning work on the structure of DNA.

If you LED doesn’t light up check: